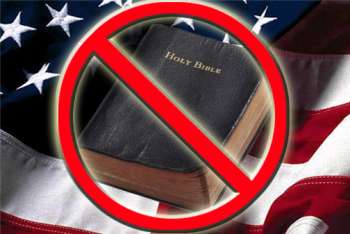 A lower court’s “hostility” towards Christianity will stand after the U.S. Supreme Court today refused to intervene in a school district’s censorship of a kindergartener’s choice of literature for a class reading.

“By refusing to hear Mrs. Busch’s case, the U.S. Supreme Court has endorsed the kind of hostility toward religion that should never be found in an American public school,” said John W. Whitehead, president of the Rutherford Institute,which took on the Newtown Square, Pa., case.

As WND reported, Donna Busch accepted an invitation to visit her son Wesley’s kindergarten classroom at Culbertson Elementary School to read a passage of Wesley’s favorite book to his classmates in October 2004. Wesley’s teacher had invited Busch because the boy was the featured student of “All About Me,” a school event to feature a particular student and emphasize the student’s personal characteristics, preferences and personality in classroom activities.

During the “All About Me” activity, a child’s parent may read aloud from the student’s favorite book. In this case, Wesley, a Christian, chose the Bible. His mother planned to read from Psalm 118.

But when Donna Busch prepared to read from the Bible, Wesley’s teacher instructed her not to do so until Principal Thomas Cook could determine whether it would be acceptable.

According to the Rutherford Institute, the principal “informed Mrs. Busch that she could not read from the Bible in the classroom because it was against the law and that the reading would violate the ‘separation of church and state.'”

Then school administrators offered Wesley’s mother an opportunity to read from a book about witches, witchcraft and Halloween. She declined the invitation.

A 2005 decision in U.S. District Court sided with the school’s decision to ban the Bible reading. Officials with the Marple Newtown School District had defended their actions as reasonable, and the trial court judge agreed.

A Third Circuit Court of Appeals decision upheld the lower court’s ruling that the school officials’ decision did not violate the Busch family’s First Amendment rights.

The court held that “educators may appropriately restrict forms of expression in elementary school classrooms” even when speakers have been invited into the classroom.

Circuit Judge Thomas Hardiman issued a strong dissent, noting that the reading of a passage from Psalms to Wesley’s class was within the subject matter of the “All About Me” unit, which was to highlight things of interest and importance to Wesley. The judge said the exclusion constituted viewpoint discrimination in violation of the First Amendment because it was based solely upon its religious character.

“If these acts of censorship and discrimination are allowed to continue, there will be absolutely no freedom for religious people in public schools in this country,” he said.

The case had highlighted the fact that while Busch was not allowed to read from the Bible, another parent was allowed to read a book about Judaism and teach the class a dreidel game.