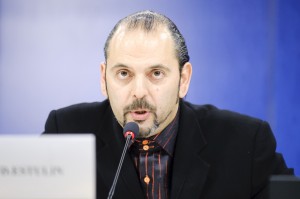 Once considered a “conspiracy” theory, the secretive story of the Council on Foreign Relations, Trilateral Commission and Bilderbergs ? tycoons worth more than the combined wealth of all Americans ? will be told in public before the European Parliament.

Author Daniel Estulin, whose work “The True Story of the Bilderberg Group” has sold millions of copies, has been invited to present an unprecedented speech before the European Parliament in Brussels June 1 on the subject of the secretive cabal.

“This is an opportunity to bring Bilderberg into the mainstream,” Estulin said. “A subject that was once considered to be in the domain of conspiracy theories is now being taken very seriously indeed.”

He was invited to speak by Mario Borghezio, Italy’s most senior member of the parliament, considered one of the most powerful legislative bodies in the world.

He compared his address there to an invitation to address a joint session of the U.S. Congress, a rare honor for anyone outside the ranks of the government.

Estulin believes the subject of the Bilderbergers never before has seen the light of day in front of such a highly respected audience.

His work will be part of a presentation titled “Bilderberg Group ? Towards Creation of One World Company Ltd.,” which will include the work of Borghezio and British members Nigel Farage and Gerard Batten.

Estulin’s book, “The True Story of the Bilderberg Group,” is based on years of his work as a Madrid-based journalist and investigative reporter.

He connected the dots between the Bilderberg Group, world events, politicians and corporate tycoons, the Council on Foreign Relations and the Trilateral Commission over a period of 15 years.

Estulin reveals how the web of people and organizations has become a “shadow government whose top priority is to erase the sovereignty of all nation-states and supplant them with global corporate control of their economies under the surveillance of ‘an electronic global police state.'”

He reveals that not all members of the group are “bad,” explaining that membership is structured like concentric circles, with varying responsibilities and relationships. But it includes almost every famous player in politics and finance, such as George W. Bush, George Soros, George McGovern and Jimmy Carter.

Estulin writes: “This parallel world remains unseen in the daily struggles of most of humanity, but, believe me, it is there: a cesspool of duplicity and lies and double-speak and innuendo and blackmail and bribery. It is a surreal world of double and triple agents, of changing loyalties, of professional psychotic assassins, brainwashed black ops agents, soldiers of fortune and mercenaries, whose primary sources of income are the dirtiest and most despicable government-run subversive missions – the kind that can never be exposed.”

He cites David Rockefeller’s own admission. Rockefeller, founder of the TrilateralCommission, a Bilderberg member and board member of the CFR, wrote: “Some even believe we are part of a secret cabal working against the best interests of the United States, characterizing my family and me as ‘internationalists’ and of conspiring with others around the world to build a more integrated global political and economic structure – one world, if you will. If that’s the charge, I stand guilty, and I am proud of it.”

The Bilderberg Group is an annual, invitation-only conference usually with more than 100 of the globe’s most influential leaders, such as heads of state and business tycoons. It always is closed to the public and press, a privacy frequently ensured by armed agents.

The conference this year is scheduled June 3-6 in Sitges, Spain.

New invitees in 2009 reportedly included Google Chief Executive Officer Eric Schmidt. Henry Kissinger, a lynchpin of continuity with other secretive internationalist groups including the Council on Foreign Relations and the Trilateral Commission, is a regular attendee as is Wall Street Journal Editor Paul Gigot.

Former British cabinet minister Lord Denis Healey, one of the founders of the group, explained the purpose of the group to Jon Ronson of the Guardian.

“Those of us in Bilderberg felt we couldn’t go on forever fighting one another for nothing and killing people and rendering millions homeless,” he said. “So we felt that a single community throughout the world would be a good thing.”

Estulin reported then his sources told him the main topic of the 2009 agenda was the world economy. He said his sources inside the group told him the movers and shakers would be discussing two options ? “either a prolonged, agonizing depression that dooms the world to decades of stagnation, decline, and poverty … or an intense-but-shorter depression that paves the way for a new sustainable economic world order, with less sovereignty but more efficiency.”