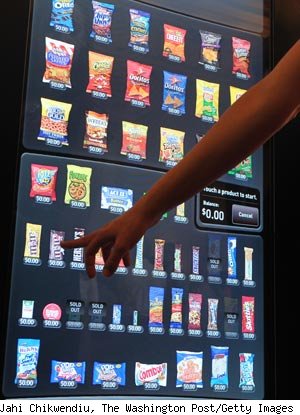 Your thumbprint might soon be the key to an afternoon candy bar. A Massachusetts based vending machine company is joining the growing ranks of companies that are field-testing new technologies.

Next Generation Vending and Food Service is experimenting with biometric vending machines that would allow a user to tie a credit card to their thumbprint.

Next Generation is currently testing about 60 of the biometric machines in various locations in the northeast.

The company is also testing other technologies. Ioannou says the key to the transforming the vending machine business is making the consumer feel more engaged.

The days might be numbered where a consumer watches a bag of chips roll through the machine and drop. Next Generation is also testing a machine that includes a 46″ touch-screen display that acts similarly to an iPhone display. The user can click on an item, flip the image and even see the nutrional information on the back of the packaging.

The machines include internally mounted cameras to monitor what is going on outside of the machine.

The tests are scheduled to run through the end of 2010. After that, Next Generation will decide if it is worth rolling out across its sales region in the northeast and Pennsylvania.

The company is also installing wireless or Ethernet connections on all of its current machines so there will be real-time reporting of the amount of goods in the machine for restocking purposes. Monitors will even be able to report when a coin is stuck in the machine. All of the current machines will be upgraded by the end of 2011.

There are other innovations that are being tested outside of the United States, including machines that use retinal scans to identify and charge consumers for their purchases.

Vending Machines Of The Future? - Retinal Scans, thumbprint payment
http://endtimeinfo.com/2010/08/vending-machines-of-the-future-retinal-scans-thumbprint-payment/
biometric IDpolice statesurveillance
Previous ArticleRFID is on the verge of tracking us all, cradle to the graveNext ArticleWhy contactless payment paves the way for a cashless society