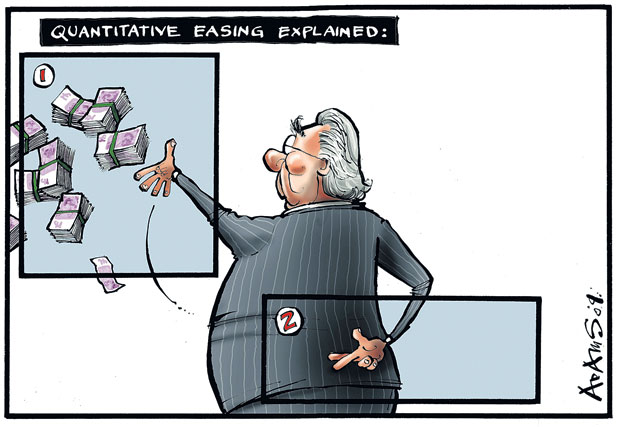 Quantitative Easing 2 will fail, for the economy has been desensitized to liquidity and cheap credit.

When the financial media refers to QE2 (quantitative Easing 2), I think of a grand ship (QE2 the luxury liner Queen Elizabeth II) foundering on the shoals. For Bernanke’s QE2, currently the single reed supporting the equity market’s continued ascent, is doomed for intrinsic, structural reasons.

An analogy which sheds light on why this is so also contains a “2”– type 2 diabetes, in which the body has become desensitized to insulin–that is, the body’s cells do not respond appropriately when insulin is present.

In a process like type 2 diabetes, the U.S. economy has become desensitized to the Federal Reserve’s flood of liquidity and cheap credit. In a healthy economy, such lowering credit costs and easing of credit availability encourages businesses and households to borrow and spend: to expand their business, to buy new capital goods, and so on.

But as many commentators have been pointing out for over a year, the “problem” in the U.S. economy is not a lack of credit or high costs of credit: the problem is too much debt and the fact that there is no market demand which requires expanding business. Indeed, everyone already has everything, and replacement of existing goods in a bloated consumer economy cannot generate GDP growth of 3-5% a year. Rather, replacement instead of expansion means the GDP will contract by 3-5% each year–a fact that is already visible if you removed the 12% of the economy that is Federal spending generated by the $1.6 trillion annual Federal deficit.

So the Fed is pouring “easy money” into an economy which has no need or desire for it, except to gamble with in the equity, bond and commodities markets.

Bernanke’s QE and ZIRP (zero-interest rate policy) has effectively destroyed the incomes once generated by savings and low-risk fixed investments, and as a result the flood of “hot money” has gushed into stocks, bonds and commodities, all of which are in bubble territory as a direct result of QE and ZIRP.

If you can’t make money with cash in savings, then the incentives are weighted in favor of taking on risk: seeking a return in stocks, commodities or other gambles.

Equally perniciously, Bernanke’s policies have fostered the belief that the Fed and Treasury will backstop any losses suffered by the big players. Moral hazard has been destroyed along with interest earned by cash. If the big banks suffer losses due to gambling, they know the Fed will rescue them by buying the toxic assets from them, all in the name of “quantitative easing.”

Bernanke’s QE ship is thus sailing directly for the shoals, and we can predict it will run aground and sink in the months ahead.

The consequences will be dire for all the asset bubbles and for the Fed itself. Having sailed the ship onto the rocks, the Fed’s treasured independence will start being questioned, and it will become politically popular to call for its dismantling.

All of Bernanke’s QE funds have flowed into risky assets, inflating concurrent bubbles in all asset classes. Gold is up, equities are up, bonds are up, commodities are up–and all can fall together as the failure of QE triggers a rejection of the policy.

The bond market could destroy ZIRP in a week. Once there is political pressure on the Fed not to “monetize” new Federal debt by buying Treasuries either directly or through proxies, then the bond market may choke on the trillions of dollars being issued in new debt.

Net result: interest rates would rise, regardless of Bernanke’s ZIRP.

QE2 will fail spectacularly, because it offers a “solution” to a “problem” which doesn’t exist.