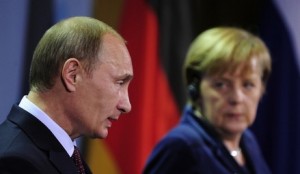 BERLIN, Nov. 26 (Xinhua) — Russian Prime Minister Vladimir Putin said on Friday he was confident for the euro and Russia and Europe may join single currency someday in the future during his visit to Germany.

The euro has shown its quality as a “stable world currency” even some euro zone countries are suffering debt crisis, Putin said at a forum of business leaders in Berlin.

He praised the measures taken by the European Central Bank to keep the stability of the currency and he was confident that the sovereign debt crisis will be overcome in the end.

“Can we assume that Russia together with Europe will one day be in a single currency zone? I can assume that,” he said.

Putin also criticized the dominance of U.S. dollar in the world economy, which makes it vulnerable.

In a later joint press conference with German Chancellor Angela Merkel, Putin reiterated his will to strengthen cooperation with the EU, saying closer economic cooperation is the first step toward a monetary union.

Merkel also said closer economic ties are the first steps and will be helpful for later adjustments on currency policies in the future.