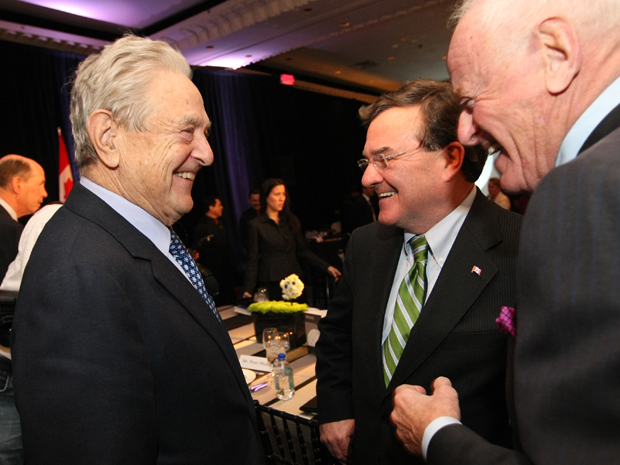 TORONTO – Billionaire investor and philanthropist George Soros may be cutting back on his gold bets, but he says the precious metal still has some kick to it, as long as conditions like low interest rates prevail.

?The conditions for (high) gold are pretty perfect,? he said during a speech in Toronto Monday evening to accept the Globalist of the Year award from the Canadian International Council.

?The big negative is that too many people know this and a lot of hedge funds are very exposed … Gold has a tendency to go parabolic,? he said, pointing at its tendency to fall as quickly as it rises.

In fact, gold fell for a third successive day on Tuesday to its lowest level in two weeks as a stronger U.S. dollar kept commodities under pressure, but spot gold was still above $1,300 an ounce.

Soros reduced some of his big bets on gold in the third quarter, trimming positions in miners including Barrick Gold Corp, Great Basin Gold and Newmont Mining. He left large positions in NovaGold Resources and Kinross Gold unchanged.

Soros also spoke on the changing geopolitical order, outlining his expectations for a rapid decline of the United States, equaled in speed only by the ascent of China?s economy since the global economic crisis erupted.

China, he told his audience ? which included Bank of Canada governors past and present and CEOs from banks and corporate giants like Research In Motion ? has been unscathed by the crisis and now has a better working economy and a better working government than the United States.

The present world order is on the brink of breaking down, he said.

?There is now a rapid decline of the United States and a rapid rise of China,? he said. ?It is happening very quickly.?

He said that China got to where it is today by looking out for its own interests, but he warned that the Asian powerhouse would have to start considering the needs of others if the new world order is to emerge intact.

?If they persist in their present course, it will lead to conflict,? he said, adding that China?s neighbors are already getting nervous about its rising global influence.