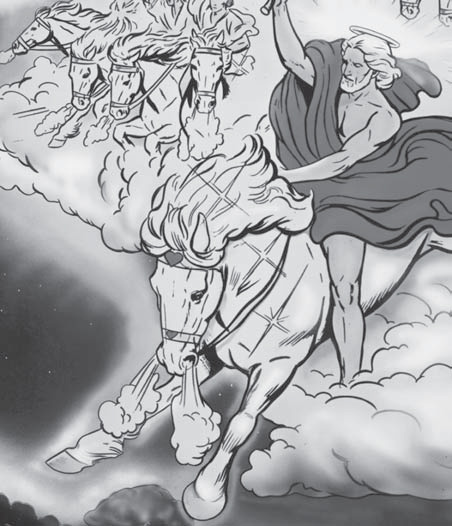 –An Overview of Endtime Bible Prophecy

Part 1 of this article covered the first seven major stages or events of the Endtime: 1) various signs of the times, as described in Matthew 24 and other passages; 2) the rise of the world dictator known as the “Antichrist”; 3) the signing of a “covenant” that will usher in a brief period of stability and signal the beginning of the Antichrist’s seven-year reign; 4) the breaking of that covenant three and a half years later; 5) a time of unprecedented trouble and suffering known as the “Great Tribulation”; 6) a nuclear war that will destroy “Babylon, the great whore” in one hour; 7) the “Rapture,” when Jesus returns at the end of the Great Tribulation to rescue His children out of this world.

8. Marriage supper
In the Rapture, Jesus has come back to catch His bride, His Church, out of the evil clutches of the Antichrist and to whisk her away to unite with Him and each other in the grandest, most glorious and thrilling wedding party that’s ever been held, the great marriage supper of the Lamb in Heaven, where the Lord will reward all His faithful children with beautiful, eternal “crowns of life” (Revelation 19:7-9; 2:10).

9. Wrath of God
After the Lord rescues and raptures His children to be with Him, the horrific vials of the great “wrath of God” will be poured upon the Antichrist and his evil forces still remaining on earth–the most horrible plagues the world has ever known! God’s angels of judgment are going to give the Antichrist and his forces what they deserve (Revelation 11:18; 14:9-10; 16:1-11).

10. The Battle of Armageddon
On a plain in what is now northern Israel, the Antichrist will lead his armies in this major campaign against those who still oppose him. But Jesus and His army of saints–all of His born-again and now resurrected children from throughout the ages–will return to earth on majestic white horses to utterly defeat and destroy the Antichrist and his evil forces in the apocalyptic Battle of Armageddon (Revelation 16:12-16; 19:11-21).

11. The Millennium
The earth will be restored to a perfect, Garden-of-Eden state (Isaiah 11:6-9; 14:7; 65:25; Hosea 2:18), and Jesus and His saints will set up the kingdom of Heaven on earth (Daniel 2:44; 7:18,22,27; Revelation 5:10). The Devil will be bound and cast as a prisoner into the bottomless pit for a thousand years (Revelation 20:1-3), and the world’s unsaved inhabitants–those who survived the Battle of Armageddon–will be forced to do what’s right. Then and only then, under the righteous rule of Jesus and the saints, will all wars cease. The world will at last be governed fairly and well with true justice, liberty, peace, plenty, and happiness for all (Isaiah 2:4; Revelation 2:26; 20:4-6). This thousand-year period is known as the “Millennium.”

During the Millennium, the resurrected saints will have new supernatural bodies with amazing powers like Jesus had after His resurrection (Philippians 3:20-21; Luke 20:36)–invincibility; complete freedom from pain, sickness, and death; abilities such as being able to fly, appear and disappear, change their appearance, read minds, communicate with each other telepathically, and stop wrongdoers with as little as a thought or a glance (1 John 3:2; John 20:19,26; Luke 24:31; Acts 10:40-41).

Those on earth will still be in natural bodies, like the ones we have now, and will have none of the saints’ supernatural powers, so they will be fairly easy to rule over with the love, wisdom, and power of Jesus and His personal leadership. Because everyone will see God’s glorious power and kingdom, there won’t be any unbelievers in the Millennium (Hebrews 8:11; Habakkuk 2:14). But sad to say, there will still be some unreceivers–those who won’t yield or obey, but rather choose to stubbornly and defiantly rebel when they get the chance, at the end of the Millennium (Isaiah 26:10).

12. The Battle of Gog and Magog
At the end of the Millennium, Satan will be released for a “little season” from the bottomless pit where he has been imprisoned–just long enough for him to deceive those unconverted rebels who will again follow Satan to the full, in open rebellion against the Lord and His government.

This rebellion will result in the catastrophic Battle of Gog and Magog, in which God will send down fire to devour them completely. In fact, it is such a horrible fire that it will completely burn up the surface of the planet, and the atmospheric heavens will roll back like a scroll and depart with a great noise (Revelation 6:14; 2 Peter 3:10). The entire surface of the planet will then be recreated into a beautiful new Earth with no more seas (though there will likely still be bodies of water), no more pollution, and no more Devil, for he will have been cast into “the lake of fire” (Revelation 20:7-10; 21:1).

13. The Great White Throne judgment
After the climactic Battle of Gog and Magog, the unsaved of all ages will be resurrected for the final Great White Throne judgment, where “the books are opened” and they will be given their final sentences according to their works and assigned to their places in the hereafter (Revelation 20:11-13). The worst and most cruel and wicked will be sent to Hell or Purgatory for punishment and purging, while those who tried to be good but were unsaved because they had not heard the Gospel, whose names will be found in the Book of Life, will be given a chance to receive Jesus and enjoy the marvelous new Earth (2 Peter 3:9; 1 Timothy 2:4; 1 Peter 3:18-19).

The entire city is made of pure gold, like clear glass (Revelation 21:18), and through those transparent walls we will be able to see out onto a beautiful, fully restored and re-created earth, which will be populated by new nations who will truly have learned the righteousness, goodness, and love of God. And eventually, because of God’s mercy and justice, all punishment on earth and under the earth will end. Almost everyone who has ever lived will finally be reconciled to God and live either with the elect within the heavenly city or else outside the city. “For God is not willing that any should perish, but that all should come to repentance” (2 Peter 3:9). “Who desires all men to be saved, and to come to the knowledge of the truth” (1 Timothy 2:4). “That at the name of Jesus every knee should bow … and that every tongue should confess that Jesus Christ is Lord, to the glory of God the Father” (Philippians 2:10-11).

Will you enjoy the Rapture, the wedding party, the millennial heaven-on-earth, and God’s eternal, heavenly city? Are you one of the saved who will be allowed to live in that great city? Receive Jesus as your Savior, if you haven’t already, and you’ll be granted instant, permanent citizenship to that great golden city and be given a foretaste of what Heaven and eternal life will be like, right here and now!