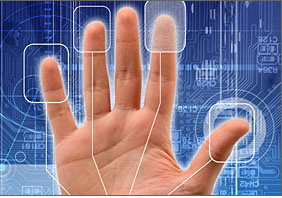 The technology needed to institute the coming “mark of the Beast” economic system, as foretold in the Bible, is progressing rapidly. So is the media campaign that will help put it in place. As governments worldwide debate the use of microchips in national ID cards and passports, as RFID (radio frequency ID) chips gain more widespread use commercially, and as microchip implants in pets and even humans become more common, new questions are being asked and old debates are being reopened. This month’s question:

Could national ID cards be the mark of the Beast?

The British government has begun issuing passports containing biometric identifiers (such as iris patterns or fingerprints), and Parliament is debating a bill that would make national ID cards compulsory in 2008. Lawmakers in the U.S. and other countries may follow suit. These ID cards are not the mark of the Beast, as the Bible plainly states that bearers will receive the mark of the Beast in their right hands or on their foreheads.

“He [the Antichrist’s government] causes all, both small and great, rich and poor, free and slave, to receive a mark on [or “in”] their right hand or on [in] their foreheads, and that no one may buy or sell except one who has the mark or the name of the Beast, or the number of his name. Here is wisdom. Let him who has understanding calculate the number of the Beast, for it is the number of a man: His number is 666″ (Revelation 13:16-18).

These ID cards are, however, preparing the way. The more people get used to some new government regulation, restriction, or provision, the more they tolerate it and eventually just learn to live with it. What may at first seem unthinkable and raise howls of protest, later becomes accepted by a few, then many, then most. And that’s how the Antichrist and his agents will capitalize on these compulsory ID cards to prepare the world for what’s next.

Once national ID cards become the norm in parts of the world where they were previously unknown, the next step will be to sell the public on the advantages of microchip implants over plastic cards?convenience, security, cost effectiveness, better law enforcement, and so on?and that it’s time to switch to the Verichip1 or something similar. Once the Antichrist’s government makes the mark of the Beast mandatory (Daniel 11:31; Matthew 24:15,21; Revelation 13:14-18), what better way to carry it out than microchip implants? Our present currency-based economic system will then be obsolete, because the chip will be capable of linking electronically to everyone’s personal financial records.

1 VerichipTM is a rice-size injectable microchip. It is a product of the U.S. company Applied Digital Solutions, and is already being used to monitor pets, convicts, Alzheimer’s patients, and children, and by the military, police, and fire departments for ID purposes. It is also being used in place of membership cards at some trendy nightclubs and resorts. These applications will be expanded, and other applications are sure to follow.