The world?s monetary system is in the process of melting down. We have entered the endgame for the dollar as the dominant reserve currency, but most investors and policy makers are unaware of the implications.

The only questions are how long the denouement of the dollar reserve system will last, and how much more damage will be inflicted by new rounds of quantitative easing or more radical monetary measures to prop up the system.

Whether prolonged or sudden, the transition to a stable monetary system will become possible only when the shortcomings of the status quo become unbearable. Such a transition is, by definition, nonlinear. So central-bank soothsaying based on the extrapolation of historical data and the repetition of conventional wisdom offers no guidance on what lies ahead.

It?s amazing that there is no intelligent discourse among policy leaders on the subject of monetary rot and its implications for the future economic and political landscape. Until there is fundamental monetary reform on an international scale, most economic forecasts aren?t worth the paper on which they are written.

Telltale signs of future trouble aren?t hard to spot. Only a few months ago, Federal Reserve Chairman Ben Bernanke and a chorus of other high-ranking Fed officials were talking about exit strategies from the U.S. central bank?s bloated balance sheet and the financial system?s unprecedented excess liquidity. Now, those same officials are talking about pumping more money into the system to stimulate growth.

And they?re not alone: Six months ago, the chief economist of the International Monetary Fund, Olivier Blanchard, suggested that raising inflation targets to 4 percent from 2 percent wouldn?t be too risky.

This sort of talk must grate on the nerves of our trading partners, China, India, Russia and others, who have accumulated pyramids of non-yielding Treasury debt. No haven there. Return- free risk may be a better way to put it. And bickering among central bankers over currency manipulation and rising trade tensions doesn?t exactly reinforce one?s confidence in a scenario of sustained economic growth and a return to prosperity.

The prospects for an orderly unwinding of the extreme posture of global monetary policy are zero. Bernanke, Jean- Claude Trichet and Mervyn King, his counterparts in Europe and the U.K. respectively, are huddling en masse upon the most precarious perch in the history of monetary affairs. These alleged guardians of monetary stability, in their attempts to shore up the system, have simply created the incinerator for paper money. We are past the point of no return. Quantitative easing may well become a way of life.

The consensus investment view seems to be that the credit crisis of 2008 was a freak occurrence, unlikely to repeat. That is wishful thinking. Monetary policy has painted itself into a corner. Based on our present course, there will be more bubbles and more meltdowns.

Financial markets and institutions sense trouble, as reflected in the flight to supposedly safe assets such as Treasuries and corporate-debt instruments with paltry yields, as well as the reluctance to lend by commercial banks. We are stuck in an epic liquidity trap. The irony is, if global central banks succeed in creating inflation, the value of these safe assets will be destroyed. It is a slaughter waiting to happen.

In the pedantic mentality of central bankers, their playbook creates just the right amount of inflation. As inflation accelerates, consumers will spend to get rid of their dollars of diminishing value and spur the economy. Once consumers start spending, it will be time to raise interest rates because a solid foundation for prosperity will have been established, they say.

But whatever the playbook promises, the capacity of financial markets to overshoot can?t be overestimated. The belief among policy makers and financial markets in the possibility of this sort of fine-tuning is preposterous, but it is the slender thread on which remaining investment and business confidence rests.

The breakdown of the monetary system will be chaotic. When inflation commences, it will be highly disruptive. The damage to fixed-income assets will seem instantaneous. Foreign-exchange markets will become dysfunctional. The economy will become even more fragile and unpredictable.

Gold is an imperfect, but comparatively reliable, market gauge for the extent of current and future monetary destruction. The recent acceleration in the dollar price of the metal to $1,381, a record high in nominal terms, coincided with talk of a new round of quantitative easing and highly visible discord among major nations on trade and currency-valuation issues. 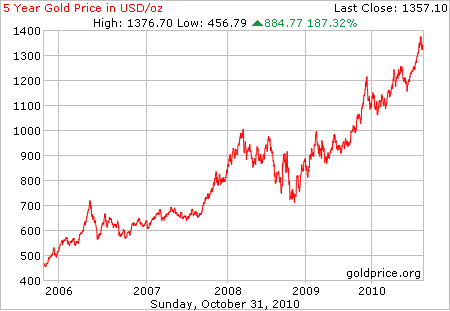 Naysayers point to gold?s price and see a bubble, without understanding that the only acceleration that is taking place is in the rate of decline of paper currency. The Fed is organizing an attack on the dollar?s value, believing that this is the most expedient way to defuse deflationary market forces. The man in the street is unaware, a perfect setup. Inflation can only be successful when the public doesn?t see it coming.

The sudden torrent of commentary on gold isn?t the sign of a bubble. Anti-gold pundits provide a great service to those who grasp this historical moment: They facilitate the advantageous positioning of the one asset most likely to be left standing when the dust settles.

(John Hathaway is a managing director of Tocqueville Asset Management LP in New York. The opinions expressed are his own.)