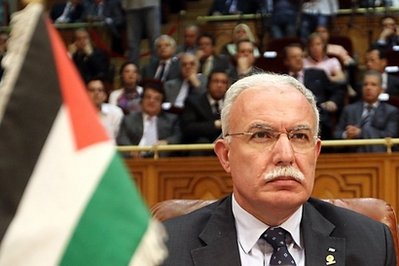 (AFP) Most of the world’s nations will announce recognition of a Palestinian state by September 2011, Palestinian foreign minister Riyad al-Malki said on Sunday.

“The majority of the international community will recognise an independent Palestinian state” by September, Malki told a group of Palestinian journalists in the West Bank city of Ramallah.

Malki said the European Union had already expressed its intention to recognise a Palestinian state by September, which would mark one year since the restart of direct peace talks that have stalled over continued Israeli settlement construction.

“The Spanish foreign minister (Trinidad Jimenez) told me that the European Union will recognise a Palestinian state at the beginning of September,” Malki said, without specifying when the conversation occurred.

“And if the European Union doesn’t take this decision then Spain will be the first European country to announce its recognition of the Palestinian state, and we’re optimistic,” he added.

But the talks ground to a halt just weeks later, with the expiry of an Israeli ban on settlement building in the West Bank.

Palestinian president Mahmud Abbas demanded a new ban, saying he would not negotiate while Israel builds on land the Palestinians want for their future state.

But US efforts to secure a new freeze failed, with Israel declining to impose any new restrictions on Jewish construction in the West Bank or east Jerusalem.

Washington has called on both sides to engage in indirect, US-mediated talks, and Palestinian and Israeli negotiators were expected in the United States this week.

But Abbas has insisted there will be no real negotiations.

In recent weeks, a string of Latin American nations have announced their recognition of an independent Palestinian state on the borders that existed before the 1967 Middle East war.

The Palestinian leadership has touted the new recognitions from countries including Brazil, Argentina and Chile. Other nations, including Paraguay and Uruguay are reportedly planning to recognise the state soon.

“Until September, we will work to secure as much recognition as we can,” he said, adding increased international recognition would strengthen the Palestinian position in new talks or if it sought UN recognition for statehood.

“We want a unanimous decision to be issued and we don’t want a US veto to be used against this resolution,” he said.

“The Palestinian delegation has the support of all the members except the American delegation,” he added.