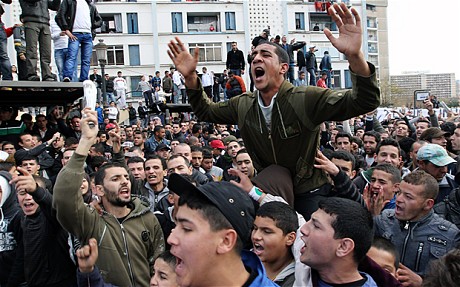 Internet providers were shut down and Facebook accounts deleted across Algeria on Saturday as thousands of pro-democracy demonstrators were arrested in violent street demonstrations.

Via telegraph.co.uk by Nabila Ramdani 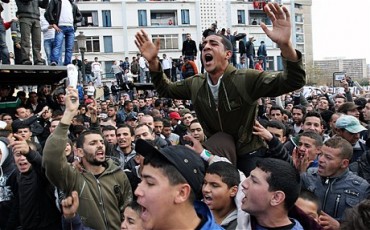 Plastic bullets and tear gas were used to try and disperse large crowds in major cities and towns, with 30,000 riot police taking to the streets in Algiers alone.

There were also reports of journalists being targeted by state-sponsored thugs to stop reports of the disturbances being broadcast to the outside world.

But it was the government attack on the internet which was of particular significance to those calling for an end to President Abdelaziz Boutifleka’s repressive regime.

Protesters mobilising through the internet were largely credited with bringing about revolutions in Egypt and Tunisia.

“The government doesn’t want us forming crowds through the internet,” said Rachid Salem, of Co-ordination for Democratic Change in Algeria.

“Security forces are armed to the teeth out on the street, and they’re also doing everything to crush our uprising on the internet. Journalists, and especially those with cameras, are being taken away by the police.” President Hosni Mubarak had tried to shut down internet service providers during 18 days of protest before stepping down as Egyptian leader on Friday.

Mostafa Boshashi, head of the Algerian League for Human Rights, said: “Algerians want their voices to be heard too. They want democratic change.

“At the moment people are being prevented from travelling to demonstrations. The entrances to cities like Algeria have been blocked.”

At least five people were killed in similar protests in Algeria in January, when the Interior Ministry said 1000 people were arrested.

On Saturday at least 500 had been arrested by early evening in Algiers alone, with hundreds more in Annaba, Constantine and Oran taking part in the so-called February 12 Revolution.

“The police station cells are overflowing,” said Sofiane Hamidouche, a demonstrator in Annaba.

“There are running battles taking place all over the city. It’s chaos. As night falls the situation will get worse.”

Algeria has the eighth largest reserves of natural gas in the world, and is also oil-rich, but its youthful population suffers mass unemployment, a chronic lack of housing, and widespread poverty. Political corruption is also endemic.