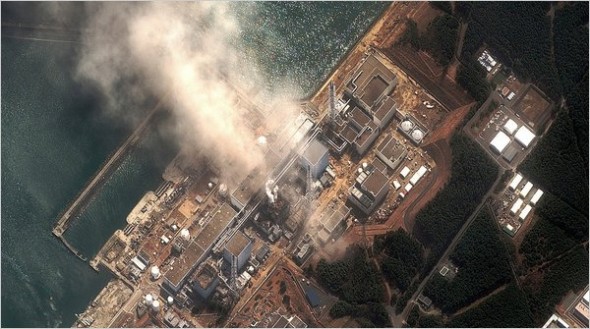 TOKYO ? Japan?s nuclear crisis verged toward catastrophe on Tuesday after an explosion damaged the vessel containing the nuclear core at one reactor and a fire at another spewed large amounts of radioactive material into the air, according to the statements of Japanese government and industry officials. In a brief address to the nation at 11 a.m. Tokyo time, Prime MinisterNaoto Kan pleaded for calm, but warned that radiation had already spread from the crippled reactors and there was ?a very high risk? of further leakage. Fortunately, the prevailing winds were sweeping most of the plume of radioactivity out into the Pacific Ocean, rather than over populated areas.

The sudden turn of events, after an explosion Monday at one reactor and then an early-morning explosion Tuesday at yet another ? the third in four days at the plant ? already made the crisis at the Fukushima Daiichi Nuclear Power Station the worst nuclear accident since the Chernobyl reactor disaster a quarter century ago.

It diminished hopes earlier in the day that engineers at the plant, working at tremendous personal risk, might yet succeed in cooling down the most damaged of the reactors, No. 2, by pumping in sea water. According to government statements, most of the 800 workers at the plant had been withdrawn, leaving 50 or so workers in a desperate effort to keep the cores of three stricken reactors cooled with seawater pumped by firefighting equipment, while the same crews battled to put out the fire at the No. 4 reactor, which they claimed to have done just after noon on Tuesday.

That fourth reactor had been turned off and was under refurbishment for months before the earthquake and tsunami hit the plant on Friday. But the plant contains spent fuel rods that were removed from the reactor, and experts guessed that the pool containing those rods had run dry, allowing the rods to overheat and catch fire. That is almost as dangerous as the fuel in working reactors melting down, because the spent fuel can also spew radioactivity into the atmosphere.

After an emergency cabinet meeting, the Japanese government told people living with 30 kilometers, about 18 miles, of the Daiichi plant to stay indoors, keep their windows closed and stop using air conditioning.

Mr. Kan, whose government was extraordinarily weak before the sequence of calamities struck the nation, told the Japanese people that ?although this incident is of great concern, I ask you to react very calmly.? And in fact, there seemed to be little panic, but huge apprehension in a country where the drift of radioactivity brings up memories of Hiroshima and Nagasaki, the haunting images of post-war Japan.

The two critical questions over the next day or so are how much radioactive material is spewed into the atmosphere, and where the winds carry it. Readings reported on Tuesday showed a spike of radioactivity around the plant that made the leakage categorically worse than in had been, with radiation levels measured at one point as high as 400 millisieverts an hour. Even 7 minutes of exposure at that level will reach the maximum annual dose that a worker at an American nuclear plant is allowed. And exposure for 75 minutes would likely lead to acute radiation sickness.

The extent of the public health risk depends on how long such elevated levels persist ? they may have declined after the fire at No. 4 reactor was extinguished ? as well as how far and fast the radioactive materials spread, and whether the limited evacuation plan announced by the government proves sufficient.

The succession of problems at Daiichi was initially difficult to interpret ? with confusion compounded by incomplete and inconsistent information provided by government officials and executives of the plant?s operator, Tokyo Electric Power.

But industry executives in close contact with officials in Japan expressed extreme concern that the authorities were close to losing control over the fuel melting that has been ongoing in three reactors at Daiichi, especially at the crippled No. 2 reactor where the containment has been damaged.

?We are on the brink. We are now facing the worst-case scenario,? said Hiroaki Koide, a senior reactor engineering specialist at the Research Reactor Institute of Kyoto University. ?We can assume that the containment vessel at Reactor No. 2 is already breached. If there is heavy melting inside the reactor, large amounts of radiation will most definitely be released.?

Another executive said the chain of events at Daiichi suggested that it would be difficult to maintain emergency seawater cooling operations for an extended period if the containment vessel at one reactor had been compromised because radiation levels could threaten the health of workers nearby.

If all workers do in fact leave the plant, the nuclear fuel in all three reactors is likely to melt down, which would lead to wholesale releases of radioactive material ? by far the largest accident of its kind since the Chernobyl.

Even if a full meltdown is averted, Japanese officials have been facing unpalatable options. One was to continue flooding the reactors and venting the resulting steam, while hoping that the prevailing winds did not turn south toward Tokyo or west, across northern Japan to the Korean Peninsula. The other was to hope that the worst of the overheating was over, and that with the passage of a few more days the nuclear cores would cool enough to essentially entomb the radioactivity inside the plants, which clearly will never be used again. Both approaches carried huge risks.

While Japanese officials made no comparisons to past accidents, the release of an unknown quantity of radioactive gases and particles ? all signs that the reactor cores were damaged from at least partial melting of fuel ? added considerable tension to the effort to cool the reactors.

?It?s way past Three Mile Island already,? said Frank von Hippel, a physicist and professor at Princeton. ?The biggest risk now is that the core really melts down and you have a steam explosion.?

The sharp deterioration came after a frantic day and night of rescue efforts focused largely on the No. 2 reactor. There, a malfunctioning valve prevented workers from manually venting the containment vessel to release pressure and allow fresh seawater to be injected into it. That meant that the extraordinary remedy emergency workers had jury-rigged to keep the nuclear fuel from overheating no longer worked.

As a result, the nuclear fuel in that reactor was exposed for many hours, increasing the risk of a breach of the container vessel and more dangerous emissions of radioactive particles.

By Tuesday morning, Tokyo Electric Power said that it had fixed the valve and resumed seawater injections, but that it had detected possible leaks in the containment vessel that prevented water from fully covering the fuel rods.

Then an explosion hit that reactor. After a series of conflicting reports about what level of damage was inflicted on the reactor after that blast, Mr. Edano said, ?there is a very high probability that a portion of the container vessel was damaged.?

The steel container vessels that protect nuclear fuel in reactors are considered crucial to maintain the integrity of the reactor and the safety of the fuel.

Mr. Edano, however, said that the level of leaking at the No. 2 reactor remained small, raising the prospect that the container was sufficiently intact to protect the nuclear fuel inside.