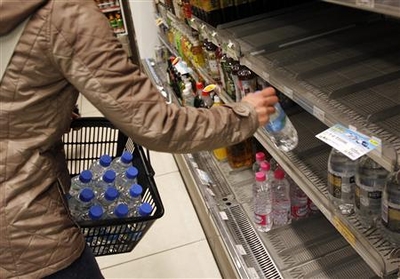 Parents asked not to feed infants tap water near tsunami-smashed nuclear plant; US to block milk, fruit and vegetable imports. 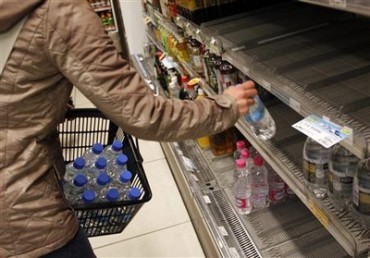 Tokyo authorities said water at a purification plant for the capital of 13 million people had 210 becquerels of radioactive iodine — more than twice the safety level for infants. “This is without doubt, an effect of the Fukushima Daiichi plant,” a Tokyo metropolitan government official said, in reference to the damaged nuclear plant 250 km (150 miles) north of the city.

Tokyo governor Shintaro Ishihara, however, said the radiation level posed no immediate health risk and water could still be used.

“But for infants under age one, I would like them to refrain from using tap water to dilute baby formula,” he said.

Crystallizing international concern, the US Food and Drug Administration said it was stopping imports of milk, vegetable and fruit from four prefectures in Japan’s crisis-hit northeast.

South Korea may be next to ban Japanese food after the world’s worst atomic crisis since Chernobyl in 1986. France this week asked the European Commission to look into harmonizing controls on radioactivity in imports from Japan.

At the six-reactor Fukushima plant, crippled by a March 11 earthquake and tsunami, engineers are battling to cool reactors to contain further contamination and avert a meltdown. In a rapidly widening problem, Japan said on Wednesday above-safety radiation levels had been discovered in 11 types of vegetables from the area, in addition to milk and water.

Officials still insisted, however, that there was no major danger to humans and urged the world not to over react.

“We will explain to countries the facts and we hope they will take logical measures based on them,” Japan’s chief cabinet secretary Yukio Edano, who has been the government’s public face during the disaster, told a news conference.

More than a quarter of a million people are living in shelters, while rescuers and sniffer dogs comb debris and mud looking for corpses and personal mementos.

Worsened by widespread ignorance of the technicalities of radiation, public concern is rising around the world and radioactive particles have been found as far away as Iceland.

Japan has already halted shipment of some food from the area and told people there to stop eating leafy vegetables.

Although there has been progress in restoring power to the Fukushima site 13 days after the accident, plant operator Tokyo Electric Power Co (TEPCO) said it needed more time before it could say the reactors were stabilized.