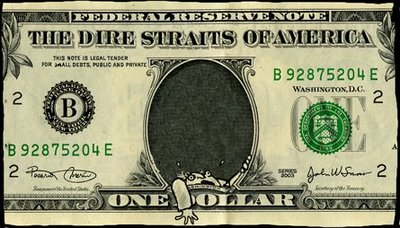 There is no getting around it.  The U.S. dollar is dying.  U.S. government debt continues to grow at a very frightening pace and the Federal Reserve is now buying up most of the new debt that is being issued.  At this point there is simply not enough money in the rest of the world to continue to feed the U.S. government’s endless thirst for more debt so the Federal Reserve has had to directly intervene in order to keep the Ponzi scheme going.  Other nations are rapidly losing faith in the U.S. dollar as they realize that there is simply no way that the U.S. government will be able to service this soaring debt for much longer.  Even now we are watching the U.S. dollar rapidly fall against a vast array of hard assets.  Virtually all major agricultural commodities have exploded in price over the past year, the price of gold is over $1400 an ounce again and last week U.S. crude oil prices topped $100 a barrel for the first time since 2008.  Meanwhile, the Federal Reserve continues to print dollars as if there is no tomorrow and the U.S. government continues to spend dollars as if the party is never going to end.  Yes, we are most definitely witnessing the death of the dollar.

As a result of the decline of the dollar, U.S. consumers are really starting to see some substantial inflation at the supermarket and at the gas pump.  In fact, the average price of gasoline in the United States increased 17 cents to $3.33 a gallon in just the past week, and more increases are expected in the weeks ahead.

Unfortunately, most Americans still don’t understand that the monstrous debt that the U.S. government has accumulated has us on a road that is going to lead to economic ruin.

Back in the early 1980s, the U.S. national debt was considered a major national crisis and politicians were pledging to do something about it.

Well, they did something about it alright.

Unfortunately, it is only going to continue to increase in size.

Entitlement programs such as Social Security and Medicare account for 58% of all U.S. government spending.  Those are “sacred cows” politically and very few politicians will even talk about making cuts to those programs.

Defense spending accounts for another 20% of all U.S. government spending.  This is another area that is very tough to cut politically.

So that leaves only about 22% of the budget to cut.  Sadly, that entire 22% could be eliminated from the federal budget and we would still be running an absolutely massive budget deficit.

Yes, we are in a huge amount of trouble.

So what are our politicians doing about it?

For example, during Barack Obama’s first two years in office, the U.S. government added more to the U.S. national debt than the first 100 U.S. Congresses combined.

But when it comes to cutting the budget nothing ever seems to happen.

Right now, Republicans and Democrats are fighting tooth and nail over $61 billion in budget cuts.

But even if the Republicans get all of those cuts it would be just a drop in the bucket.

But listening to the Republicans and the Democrats blow hot air you would think that the fate of the world is at stake.

Meanwhile, our states are going broke as well.  In fact, 30 U.S. states have borrowed a total of $41.5 billion from the federal government just so that they could continue paying out unemployment benefits.

Things have gotten completely and totally out of control.

But if the U.S. government quits borrowing and spending money so feverishly it will cause a dramatic slowdown in the U.S. economy and nobody seems to want that.

Even with all of the crazy government spending that has been going on the U.S. economy is still on the verge of total collapse.

Damon Vickers, the author of “The Day After The Dollar Crashes?, recently discussed this problem during an appearance on CNBC….

Did you notice how Vickers even used the term “new world order”?

The truth is that globalist institutions such as the IMF and the World Bank have been very busy discussing what the world is going to use as a global reserve currency after the death of the dollar.

Since World War 2, the world economic order has been centered around the United States and the U.S. dollar.  But now all of that is changing.

The American economy is in the midst of a long-term decline and the U.S. dollar is slowly but surely dying.  Already quite a few nations have started to move away from using the dollar in international commerce.  The advantages that the U.S. has enjoyed from having the reserve currency of the world are about to disappear.

So what would a “new economic world order” look like?

Nobody knows for sure, but needless to say it wouldn’t be as favorable for the United States as the current system is.

Most Americans have no idea how close we are to a radical transformation of the global financial system.  The dominance of the U.S. dollar is rapidly fading.  The financial stability that so many of us have taken for granted for so long is about to crumble.

Every single day your dollars become a little less valuable and at some point they are going to start to become much less valuable with each passing day.  You might want to spend them on something real while you still can.

Will the Death of the Dollar Lead to the Birth of a New World Economic Order?
http://endtimeinfo.com/2011/03/will-the-death-of-the-dollar-lead-to-the-birth-of-a-new-world-economic-order/
dollareconomic collapsefinancial crashinflationquantitative easing
Previous ArticleDNA ?Genetic Patdown? Introduced to Airports by DHSNext Article‘Israel planning new war on neighbors’