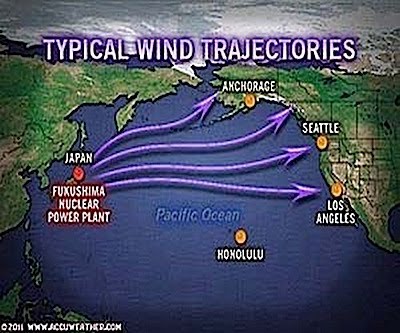 Radioactive Xenon 133 (5.243 day half life) has now reached the entire Eastern seaboard, and soon will likely cover the entire world.

Additionally, below is a projection of radioactive Iodine over Japan…

While Japanese futures briefly flirted with another advance, they subsequently dropped by 1% to 9,450, even despite the BOJ’s latest injection of 2 trillion yen, which if it continues at this rate will surpass 100 trillion yen in injections within two weeks: an unprecedented feat, even by the Federal Reserve’s standards. Of particular note weighing on the markets has been the news from Kyodo that, in confirmation of our fears that zones “Under Survey” are nothing but hotbeds of unprecedented radiation, reported radiation levels are 1,600 times higher than normal 20 kilometers from the power plant. Recall that the first evacuation radius was just 10 km. Assuming a power rate of declining fall out strength, means that the radiation within the 20 km diameter circle centered on Fukushina is currently hundreds of thousands to millions of time higher than normal.

Data collected by an IAEA team show that radiation levels of 161 microsievert per hour have been detected in the town of Namie, Fukushima Prefecture, the officials said.

The government has set an exclusion zone covering areas within a 20-km radius of the plant and has urged people within 20 to 30 km to stay indoors.

We are eagerly awaiting the announcement from the Japanese government that the “new normal” is 1,601 greater than the old one. And that Hydrogen bonds between purines and pyrimidines, contrary to conventional wisdom, are really made of adamantium, and no amount of incremental high energy electromagnetism can possibly break them apart.