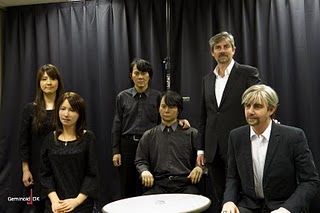 Tired of going to work? Then why not send a robot that looks just like you instead? Geminoids are androids designed to look exactly like their masters and the one in this video is modelled after Henrik Scharfe, a professor at the Center for Computer-mediated Epistemology at Aalborg University, Denmark.

Using software, a human operator’s facial expressions and body posture are mapped onto the robot. It’s so realistic it can even blink and simulate breathing. These movements are possible thanks to actuators placed in its face, neck, and upper torso.

Scharfe hopes to use the robot to study how humanoids interact in social situations and how they might be used to overcome cultural barriers. He’s interested in perfecting human-robot interaction by examining subtleties like eye contact, which humans are particularly sensitive to but is difficult for robots to maintain. He says:

We don’t know that much about how tolerant we actually are in such situations and how we can best design the communication to be adequately natural.

The first Geminoid Summit was held at the Advanced Telecommunications Research Institute International (ATR) in Nara, Japan, last March. Scharfe attended with his robot double to compare notes with two other Geminoid owners, including the inventor of the Geminoid concept, Hiroshi Ishiguro.

According to Scharfe, technologies to make robots more ubiquitous in daily life, such as bipedal walking, better navigation and obstacle avoidance, grasping, image recognition and speech synthesis are improving rapidly. So what will happen when we seriously begin to combine them all?