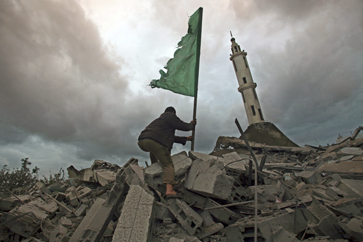 In all likelihood, the Palestinians are going to unilaterally declare statehood in Judea and Samaria within the coming year. This is not a ploy or a desperate attempt on their part but rather a clear, rational decision. By correctly gauging the stark contrast between the massive international support for their cause as opposed to the steadily increasing de-legitimization of Israel the ?apartheid state,? the Palestinians have wisely decided to bypass direct negotiations since there is no point in paying for something when you can get if for free.

Thus, with country after country pledging its support, the Palestinians are going to take their case to the United Nations.There, the Palestinians have nothing to lose for even if the Security Council rejects their bid for statehood, it will most likely be approved by the General Assembly. Although this is less significant than an endorsement by the Security Council, an approval by the General Assembly does nonetheless have some teeth. Most notably, as many commentators pointed out, there is something known as UNGA Resolution 377 that allows the General Assembly to call for sanctions or even military force against a country that fails to implement its recommendations.

If the ?civilized world? helps bring the Palestinian plan to fruition then a very likely result of such actions will be the outbreak of war. Thus, in a world turned upside down it will be the UN, a body formed to help foster peace throughout the world, which will be directly responsible for bringing the next great Arab-Israeli war to the Middle East. Notably, more than 60 years ago the Palestinians rejected a similar state that had been allotted to them by the UN. A few months later when Israel had the “chutzpa” to declare a state, rather than reject one, in the portion they were granted by the UN, several Arab countries attacked the new Jewish state. That was the first war of independence, a result of Arab refusal to receive anything less than 100%.

In the following years, nothing has fundamentally changed in this respect, the only difference being that the Arabs have finally learned how to achieve their goal. Thus they’re ready to accept what they formally rejected as a means for eventually getting it all.

This brings us to today and the quickly approaching second war of independence. Unlike 60 years ago, this time around nearly the entire international community will be aligned with the Palestinians against Israel, making Israel the sole villain. The war will not break out immediately, but rather, it will slowly escalate. First there will be calls for sanctions against Israel for failing to immediately remove its military and citizens from the new Arab state in Judea and Samaria. Then there will be the predictable eruption of terrorist attacks in Judea and Samaria, making life hell for the Jews living there. The attacks will then spill over into the rest of Israel, bringing back memories of the horror of a decade ago. Next up will be rocket attacks from Hamas in the south and Hezbollah in the north. Thanks to a porous border with Egypt as well as other regional changes, Iran will have no problem constantly rearming its proxies. As the attacks intensify, Israel will be routinely chastised for retaliating and not showing proper restraint, as such Arab attacks will be viewed as somewhat understandable in light of continued Israeli noncompliance. Moreover, Israeli reprisals will probably draw some neighboring countries into the fray as they all begin to sense Israel?s imminent downfall.

If Israel is still obstinate following the sanctions and Arab attacks, then the UN may call for military intervention in order to enforce the will of the international community. Consequently, they will do to Israel what they will never do to Iran. After all, Israel’s continued presence in Judea and Samaria – and not Arab violence, terrorism, hatred, anti-Semitism and intransigence ? will be considered, like it is today, as being the main reason that peace and harmony is lacking in the region.

Following the isolating effect of sanctions and de-legitimization, together with incessant terrorist attacks and missile showers, the threat of military intervention will probably do the trick. Having been cowered by the cumulative effect of all the actions, Israel will be sufficiently pliable to give in on everything ? the removal of all Jewish presence from Judea and Samaria, the acceptance of the return of Palestinian refugees to Israel, the division and internalization of Jerusalem. Thus, the Palestinian War of Independence, the first stage in the total elimination of the State of Israel, will come to a conclusion.

Is this scenario an exaggeration? Perhaps, although one should keep in mind that before the Gaza Disengagement there were those who warned that the Israeli pullout from Gaza would result in missiles landing in nearby Ashkelon. As expected, such voices were ridiculed and ultimately ignored. History of course showed that these “right-wing hawks” erred. They were far too conservative with their predictions as missiles not only exploded in nearby Ashkelon but even reached Beersheba, nearly 50 kilometers to the east.

Israel, the tsunami is coming. Wake up!