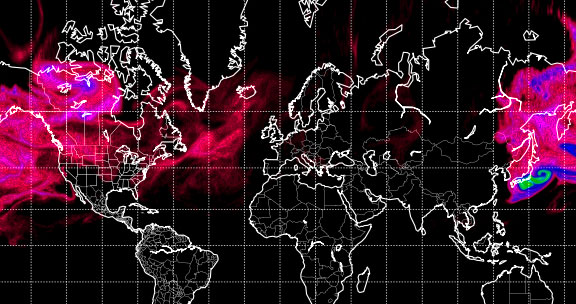 ?Dr. Robert J. Gilbert has a multi-faceted background in both spiritual and scientific studies. He is a former U.S. Marine Corps Instructor in Nuclear-Biological-Chemical Warfare Survival; since leaving the service in 1985 he has conducted independent research into the Geometric basis of modern science and new technologies?..? Read more

Clearly, in light of his background, Robert Gilbert is someone worth listening to on the subject of radiation dangers from the recent nuclear disaster in Japan. Here?s an excerpt from a page on his Vesica.org website, dealing with the subject:

Most Contaminated food areas of North America (based on fallout wind spread patterns charted by European scientific research agencies) in order of likely intensity of contamination, starting with the most contaminated:

The majority of contamination is in the northern hemisphere and the Pacific Ocean region.

Also note that radioactive contamination is being found on non-food products being imported from Japan.

Europe is also far less contaminated that North America, although it is also experiencing significant fallout; so it is a better source for products than North America, however not as good as Southern Hemisphere sources.  (However some South American produce may contain high levels of pesticides not allowed to be used in the U.S. or Canada.)

All Ocean-Derived Products from the Pacific Ocean: the Fukushima accident dumped millions of times the normal background levels of radiation into the Pacific, where it is affecting the entire ocean (most toxic near Japan and bordering areas, but now reaching to the US West Coast: debris from the Tsunami in Japan is also expected to start washing up on the West Coast in the near future.)  There are already reports of Pacific Fish showing radioactive contamination.

This indicates a need to be cautious regarding:

Milk and all Dairy Products (butter, cheese etc.) from all animals: Cows, Goats, and Sheep (Dairy products have the most intense immediate absorption of radiation from fallout). Radioactive contamination of milk has been found throughout the United States, especially on the West Coast.

Any plant with a large surface area exposed to the air while growing:  The most intense radiation absorption in plants is through rain falling directly on the leaves  of the plant, where it is directly absorbed.  Rainwater absorbed through the earth into the plant is already of much lower radiation intensity due to the filtering affect of the soil.

All broad leaf plants and plants with large surface areas grown in the open air (rather than in greenhouses) are the most contaminated, for instance Salad Greens, Spinach, Cabbage etc.  Contaminated crops in California (carrying radioactive iodine and cesium) have already been confirmed by UC Berkeley.

[Carrots and other root vegetables are less contaminated due to growing underground.]

Water from Rainwater or Open Lake type catchments: instead drink bottled water, or water from underground wells or other underground sources (radiation is greatly reduced when the particles have to travel through the ground.)

PREGNANT (OR BREASTFEEDING) WOMEN AND YOUNG CHILDREN SHOULD ESPECIALLY BE CAREFUL REGARDING THESE ITEMS COMING FROM FALLOUT AFFECTED AREAS??