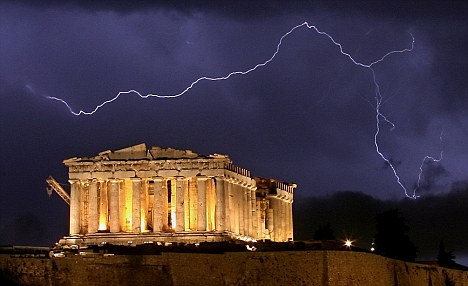 US finances are in almost as troubled a state as the worst-hit members of the eurozone, economists say, underscoring the pressing need for Washington to reach agreement on how to reduce the spiraling deficit.

A gauge of sovereign risk from economists at Deutsche Bank placed the US just behind Greece, Ireland and Portugal among 14 advanced economies.

The report, from economists led by Peter Hooper, warned that a failure to make substantial political progress on deficit reduction “would substantially raise the risk of a bond market crisis”.

The warning comes days after Standard & Poor’s said that it may lower its AAA assessment of the US, amid a political logjam over debt reduction in Washington, which will intensify concerns about Western government debt.

At the weekend, Greek Prime Minister George Papandreou criticised credit rating agencies, saying they were “seeking to shape our destiny and determine the future of our children”.

Greece is one small element of wider sovereign debt concerns that have begun to encompass the US, the world’s biggest economy.

Capitol Hill has been consumed with political wrangling over whether to increase a $US14.3 trillion ($13.3 trillion) debt ceiling that is due to be breached next month.

If the US national debt hits that level, it would trigger a default.

Deutsche Bank’s analysis acknowledged that the risk attached by financial markets to US debt remained very low, as demonstrated by the country’s modest borrowing rates. That was in part due to the fact that the US dollar remains the premier reserve currency for world governments.

However, the report noted: “Reputation and reserve currency status can be lost, and failure to move US fiscal policy off its currently unsustainable path would certainly increase the risk.”

Britain’s Chancellor of the Exchequer, George Osborne, this month hailed signs that the political mood in Washington was shifting towards tough action on the deficit.

For the time being, though, US Democrats and Republicans have been mired in mudslinging over the debt ceiling.

The White House has accused Republican congressmen of risking a global recession by refusing to agree to raise the debt ceiling unless it is paired with deep spending cuts.

Even if a deal is struck on time, that will not eradicate the risk of political deadlock over longer-term fiscal problems such as spiraling healthcare spending.