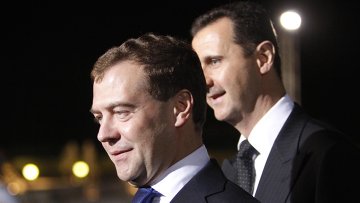 Russia is refusing to cooperate with the West over the unrest in Syria as it does not want to wreck ties with a traditional ally and feels let down by the Western military action in Libya, analysts said.

On Wednesday, Moscow clashed with the West at the United Nations over Syria’s deadly crackdown on opposition protests, with Russia and China blocking a proposed Security Council statement condemning the Syria violence.

The position stands in contrast to its more cooperative stance last month when President Dmitry Medvedev ordered Russia to abstain from the UN Security Council resolution on Libya that essentially authorised military action.

Medvedev, who seeks better ties with Washington, risked worsening his relationship with his senior partner in the ruling tandem Vladimir Putin, who is known for his uncompromising position on the use of force in crises.

But now the Kremlin feels cheated by the West, accusing it of exceeding the UN mandate and getting entangled in a military operation in Libya.

And if the West expects Russia’s cooperation on Syria, Kremlin goodwill will be in short supply, analysts said.

“Russia has seen what happened in Libya. It would be logical to assume that Russia’s stance on Syria would be more clear-cut that that on Libya,” said Alexander Filonik, head of the Arab Studies Center at the Institute of Oriental Studies.

“There is concern that events in Syria could develop according to the Libyan scenario,” he told AFP.

Yevgeny Satanovsky, president of the Institute of the Middle East, struck a similar note. “Russia’s position on Libya was simple — run around this minefield yourself. On Syria it will be even simpler,” he told AFP.

“The logic calls for Russia to say ‘no’.”

Mindful of accusations of human rights violations at home, Russia has traditionally been sensitive about UN interference in what it considers the domestic affairs of sovereign nations.

Nerves are especially frayed ahead of presidential polls next March amid frenzied speculation over whether Medvedev or Putin will stand.

Putin last month famously called the UN resolution on Libya a “medieval call to crusade” and this week again slammed the West over its action in Africa.

“Are we going to bomb and carry out rocket attacks everywhere? What was there a trial?” he said.

Russia’s deputy UN ambassador Alexander Pankin has warned against “taking sides” in Syria and other Arab countries, saying “such approaches lead to a never-ending circle of violence.”

On Thursday, the foreign ministry called on Syria to conduct a thorough probe into those responsible for killing civilians during the country’s month-long uprising and reiterated that the conflict should be resolved peacefully.

In seeking to distance itself from the events in Syria, Moscow also shows that it does not want to jeopardize its ties with a traditional Soviet-era ally, which was one of the few countries to back Moscow in its war with Georgia in 2008.

Medvedev last May became the first ever Russian or Soviet head of state to travel to Damascus where he promised President Bashar al-Assad help in developing Syria’s oil and gas infrastructure and voiced readiness to build a nuclear power station in the country.

Russia is keen to promote itself as a major power broker in the Middle East and Moscow’s influence there largely depends on its ties with Syria, an increasingly important regional player with ties to Iran and the Lebanese militant group Hezbollah and Palestinian Islamist group Hamas.

“The fall of the Syrian regime will mean the disappearance of Russia’s last partner in conducting Soviet-style policies in the Middle East whose essence in many ways boiled down to countering the United States,” Middle East analyst Alexander Shumilin wrote in the opposition newspaper Novaya Gazeta.