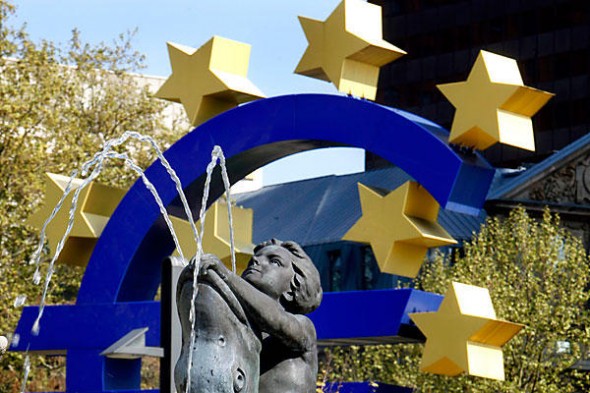 Well, nobody is leaving the eurozone (as expected), but EU is merely ratcheting up the rhetoric one notch seeing full well what happens to countries that continue to endorse unlimited banker bail outs. And it is likely that the war of words will simply continue escalating until such time as the Greek restructuring becomes inevitable, which will likely happen not sooner than a year from now due to Greek bailout liquidity availability and nobody will push the country to do the inevitable until there is even one spare euro in the coffers for fears of what will happen to Deutsche Bank and the European financial domino.

So for those wondering what happened at last night’s secret finance minister meeting, one one hand, as Dow Jones reports, Greece “asked its euro-zone partners to ease the country’s deficit targets as it struggles to comply with strict austerity terms set under last year’s financial bailout agreement, a senior euro-zone government official said Saturday. The senior official said Greece acknowledged that it is unlikely to be able to return to the bond market next year and might need to tap the European Financial Stability Facility, the EU’s new bailout fund, for funding. A German proposal to possibly extend the maturities of Greek debt falling due in 2012 also was discussed, this person said. Athens has a long-term borrowing requirement of EUR27 billion in 2012.

“Greece has asked for the deficit targets to be eased, specifically to push the budget deficit target of 3% of GDP in 2014 forward by at least two years.”” Alas, as expected the latest panhandling attempt by Greece was met with abject failure: “No decisions were taken, according to the Commission’s statement. Greece’s request for easier terms didn’t win the assent of Germany and other participants in Friday’s meeting, according to a senior European official.” In other words, the country is on autopilot, and possibly worse. Per Bloomberg: “European Union officials may require Greece to provide collateral for aid as policy makers struggle to prevent the euro area?s first sovereign debt restructuring, said a person with direct knowledge of the situation.”

In other words, for the first time since Weimar, a country may soon be forced to collateralize superpriority debt issuance to foreign creditors: an exercise not really seen in international politics since the Weimar war reparations… and at least Germany had its own currency back then. Summary: the EU just told Greece to prepare for Debtor in Possession loan issuance. Basically should Greece default, and it will, the Parthenon will go to Germany, Santorini will go to Luxembourg, Piraeos will likely end up in IMF hands, and the Chinese will own the rest. Welcome to sovereign debt restructurings for the 21st century.

The ECB, the European Commission, France and others remain opposed to any rescheduling of Greek debt, fearing it could spark worsening capital flight from other indebted euro members and damage the Greek banking system.

“There is strong opposition to this by Trichet,” one euro-zone official said, adding that the Greek issue will be “extensively discussed” at the May 16-17 meeting of European Union finance ministers.

These meetings precede the June audits of the Greek government’s budget to measure the sustainability of the country’s debt load, seen as a key hurdle for Greece’s recovery plan.

The Eurogroup’s Juncker told journalists after the Luxembourg meeting Friday night that it was decided that Greece needs a further adjustment program, but he excluded restructuring the country’s sovereign debt.

The president representing the 17 countries using the euro joined other officials in firmly denying press reports that Greece was considering a withdrawal from the euro zone altogether.

“We are not discussing the exit of Greece from the euro area, this is a stupid idea and an avenue we would never take,” Juncker said Friday.

Asked if rescheduling Greek debt to extend maturities also had been excluded, Juncker said: “we have excluded any restructuring of Greek debt.”

Some more from Bloomberg with the quote du jour:

?We?ll just have to bite the bullet,? Barthle said in an interview today from his district in the state of Baden- Wuerttemberg. ?We need to help Greece help itself. What?s the alternative? We don?t want to be pushed over the edge into restructuring.?

And just how will Greece be helped? Why by collateralizing any new supersenior debt with bits and pieces of its sovereign holdings:

Increasing aid may run into opposition in Germany and Finland, where bailouts have sparked a backlash. Finnish Finance Minister Jyrki Katainen, who suggested seeking collateral for Ireland for its November bailout, is leading talks to form a government that may include the euro-skeptic True Finns party.

As to the whole abandoning the eurozone lunacy: that will never voluntarily happen until Greece has even a cent of taxpayer funded bailout money:

Greek Prime Minister George Papandreou said the report of a possible euro exit was made up and the government was handling the country?s debt in the best way possible, Kathimerini newspaper reported.

Abandoning the euro would have ?catastrophic? consequences, Greek Finance Minister George Papaconstantinou told Italian newspaper La Stampa. Public debt would double, consumer spending power would be ?shattered? and the country would sink into a ?war-like recession,? he said.

Which leaves just one option:

?The likelihood of a restructuring of Greek market debt this year has gone up,? David Mackie, London-based chief European economist at JPMorgan Chase & Co., said in a note yesterday.

Greece has about 330 billion euros in outstanding bonds, according to a May 5 report by UBS AG. The Swiss bank estimates that 22 percent is held by Greeks and Cypriots, the ECB has 19 percent and the EU and International Monetary Fund together have about 11 percent.

Greek bonds have declined since the 2010 bailout, with yields on two-year notes reaching a euro-era record of 26.27 percent on April 28. The extra yield investors demand to hold Greek 10-year debt over comparable German bonds widened 4 basis points to 1,233. Greece was supposed to return to markets next year even as its debt peaks at 159 percent of gross domestic product.

So restructuring it is, but not before European bankers show their generosity one more time by funding the Greek DIP loan which in one year will give them a first lien on all the assets used as collateral, probably at a blue light special LTV valuation. We hope Portugal and Ireland are watching and learning how the ECB has commenced the process of peacetime reparations.

EU To Greece: "We Want To Help You Help Yourself"... And We Want To Own You After You File For Bankruptcy
http://endtimeinfo.com/2011/05/eu-to-greece/
debtdebt crisisEuropean UnionGreece
Previous Article“And there shall be famines…”Next ArticleGold could hit $2000: Deutsche Bank