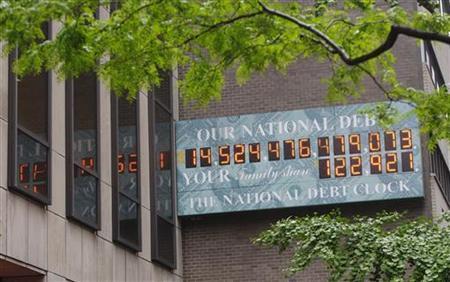 President Ronald Reagan once famously said that a stack of $1,000 bills equivalent to the U.S. government’s debt would be about 67 miles high.

In $1 bills, the pile would reach to the moon and back twice.

The United States hit its legal borrowing limit on Monday, and the Treasury Department has said the U.S. Congress must raise the debt ceiling by August 2 to avoid a default.

The White House is trying to hammer out a deal with lawmakers to cut federal spending in exchange for a debt-limit increase.

Most people have trouble conceptualizing $14.3 trillion.

Stan Collender, a budget expert at Qorvis Communications, said the biggest sum most Americans have ever handled — in real or play money — is the $15,140 in the original, standard Monopoly board game.

The United States borrows about 185 times that amount each minute.

Here are some other metrics for understanding the size of the national debt and United States borrowing:

With that amount, the United States could buy each of its more than 300 million residents an Apple Inc iPad.

* In a 31-day month, that means the United States borrows about $4 billion per day.

A stack of dimes equivalent to that amount would wrap all the way around the Earth with change to spare.

* In one hour, the United States borrows about $168 million, more than it paid to buy Alaska in 1867, converted to today’s dollars.

In two hours, the United States borrows more than it paid France for present-day Arkansas, Missouri, Iowa and the rest of the land obtained by the 1803 Louisiana Purchase.

* The U.S. government borrows more than $40,000 per second. That’s more than the cost of a year’s tuition, room and board at many universities.

“That usually gets their attention,” Doug Holtz-Eakin, who was chief White House economist under President George W. Bush, said in an email. “I have two kids, so every 10 seconds, the feds borrow more than I paid lifetime.”

* The Congressional Budget Office projects the total budget deficit in fiscal 2011 at about $1.4 trillion.