RUSSIAN Prime Minister Vladimir Putin has decided to run for the presidency next year, raising the possibility of a power struggle with his protege Dmitry Medvedev, the incumbent Kremlin leader, say highly placed sources. 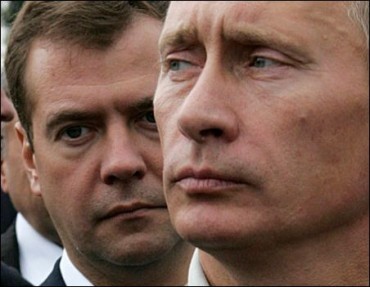 The once-close relationship between Mr Putin, the tough-talking former KGB officer who has inspired a personality cult, and Mr Medvedev, a softly spoken Twitter enthusiast, has become increasingly fractious amid speculation in Moscow that the younger man wishes to stand again.

Insiders familiar with both leaders said Mr Putin, who served eight years as president before becoming Prime Minister three years ago, had begun to lose confidence in Mr Medvedev’s loyalty.

Under the constitution, Mr Putin’s move to reclaim the presidency could see him rule for two consecutive six-year terms until 2024, when he will be 72. If so, he would have served as prime minister or president for 24 years in all.

The sources said recent criticism by Mr Medvedev had made Mr Putin suspicious. “Putin will run for president. He’s made up his mind for good. Rumours that he’s still weighing his options are false,” said one source.

“There’s mounting tension between Medvedev and Putin. The view in Putin’s camp is that Medvedev has started behaving with too much arrogance and wants to challenge him. Putin is starting to doubt his loyalty.”

The Russian constitution allows the president to serve no more than two consecutive terms. Mr Putin stepped down in 2008 and handed the reins to Medvedev on the tacit understanding that he could come back next year if he wished.

At first Mr Medvedev was regarded as a puppet. He even took to imitating Mr Putin’s distinctive macho stride and speaking style. But three years later, Mr Medvedev, who at 45 is still Russia’s youngest leader in more than seven decades, is understood to be reluctant to step aside for Mr Putin.

The President is said to be frustrated at the perception, both at home and abroad, that he is a lame duck. A second term would give him the power to pursue a more liberal agenda of greater political freedom and sweeping judicial reforms, in contrast to that of Mr Putin, who is viewed as authoritarian.

“Both Putin and Medvedev see themselves as the next Russian president,” said another Kremlin source.

“Given that the former brought the latter to power, that’s a problem.

“It’s the classic tale of the pupil trying to overtake his master. Putin’s camp thinks Medvedev is getting too cocky while the President and his people say it’s time for the old man to retire.”

In a comment seen as a veiled attack on Mr Putin, Mr Medvedev said last week: “A person who thinks he can stay in power indefinitely is a danger to society.

In the past, Mr Medvedev, a Led Zeppelin fan and iPad devotee who speaks fluent English, has been careful to avoid open criticism of Mr Putin but they have clashed recently.

“Make no mistake, Medvedev is an impressive leader who would be good news for Russia if he stays on,” said a Kremlin source. “There’s rivalry with Putin but they’re both too smart to get drawn into a nasty personal conflict.

“The difference is simple: Putin can ask Medvedev to step aside. No matter how reluctantly, he’ll oblige. But Medvedev can’t stop Putin from coming back. And Putin wants to be president again.”