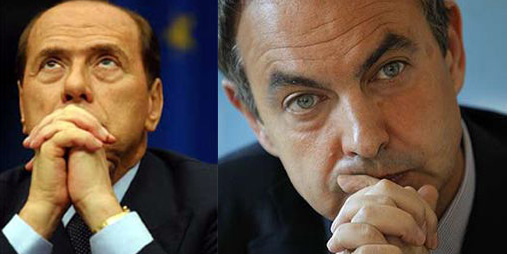 Via The Telegraph, by Ambrose Evans-Pritchard

Once again Europe’s debt crisis has metastasized, and once again the financial authorities face systemic contagion unless they take immediate and dramatic action. 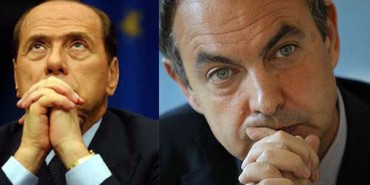 If the ECB’s Jean-Claude Trichet is right in claiming that Europe was on the brink of a 1930s financial cataclysm a year ago – and I think he is – it is hard see how the threat is any less serious right now.

Fall-out from Greece flattened Portugal and Ireland last week. It is engulfing Spain and Italy, countries with ?6.3 trillion of public and private debt between them.

Yields on Italian 10-year bonds hit a post-EMU high of 5.3pc on Friday. This is not just a theoretical price: the Italian treasury has to roll over ?69bn (?61bn) in August and September; it must tap the markets for ?500bn before the end of 2013. The interest burden on Italy’s ?1.84 trillion stock of public debt is about to rise very fast.

Spanish yields punched even higher, through the danger line of 5.7pc. The bond markets of both countries are replicating the pattern seen in Greece, Portugal, and Ireland before each spiraled into insolvency. And the virus is moving up the European map. French banks alone have $472bn (?394bn) of exposure to Italy and $175bn to Spain, according to the Bank for International Settlements.

“We believe the European sovereign crisis might be entering a new phase with contagion reaching the larger economies,” said Jacques Cailloux, chief Europe economist at RBS.

“It is unclear to us how this latest negative shock to confidence is going to be undone in the absence of a ‘shock and awe’ policy response.”

Italy’s premier Silvio Berlusconi has chosen this moment of acute danger to undermine his own finance minister, Giulio Tremonti, the one figure in his cabinet respected by global bond vigilantes. “He’s not a team player, and thinks he’s genius and that everybody else is a cretin,” said Mr Berlusconi.

Meanwhile, Mr Tremonti is living free in the Rome house of a political ally just arrested on corruption charges. Resignation rumours circulate hourly. You can hear the knifes sharpening.

“The government ceased to exist months ago,” wrote Massimo Giannini in La Repubblica.

“What other country would allow itself the suicidal luxury of offering cynical markets such a spectacle of political disintegration and institutional decay at a time when Europe is destabilized by Greece’s sovereign debt and haunted by contagion? We have a band of poltroons dancing under the volcano, and the volcano is about to erupt.”

What can the eurozone now do to trump its last “shock and awe”? More loan packages solve nothing. Pretending that this is just a liquidity crisis will no longer wash.

What it will take is a belated recognition by Germany that this crisis is not a morality tale contrasting virtuous, thrifty Teutons, with feckless Greco-Latins and Guinness-befuddled Celts, but rather a North-South structural crisis caused by the inherent workings of monetary union.

The implications of this are profound. Germany must now be willing either to buy or guarantee Spanish and Italian debt, and in doing so to cross the Rubicon to fiscal and political union, or accept that EMU must break up with calamitous consequences for German foreign policy. Large matters, beyond the intellectual vision of Germany’s current leaders.

It will also take a total purge of the ECB’s leadership, which clings to its madcap doctrine that monetary policy can be separated from other emergency operations, and which chose last week of all moments to raise interest rates again and kick Spain in the teeth. It did so knowing that the one-year Euribor rate used to price more than 90pc of Spanish mortgages must rise in lock-step. As one Spanish commentator put it, the Eurotower in Frankfurt should be torn down, and salt sown in the ground.

If the governor of the Banco de Espana really endorsed this rate rise (supposedly “unanimous”) he should be hauled before the elected Cortes and ordered to explain such locura: if the EU authorities object, they should be told in crisp terms that Spain is a great and ancient sovereign nation facing a national emergency and will do as it sees fit.

Where is the inflation threat? The eurozone’s M1 money supply has contracted on a month-to-month basis over the past two months, with sharper declines in the periphery. Annualized M1 growth is falling, not rising: it was 2.9pc in March, 1.6pc in April, and 1.2pc in May. Broader M3 grew at a rate of 2.2pc over the past three months.

The PMI data for Italy and Spain have dropped below the recession line. The Goldman Sachs global PMI indicator shows that 80pc of the world is tipping into a slowdown, including India and China. Taiwan’s bell-weather exports to China sank 12pc in June from the month before.

The calamitous US jobs data released last Friday leave no doubt that the US remains trapped in depression. Broad U6 unemployment rose from 15.8 to 16.2pc in June; the numbers in work fell by a quarter million to 153.4m; the average time without a job reached a fresh record of 39.8 weeks; hourly pay fell; hours worked fell; the employment/population ratio crashed to new lows of 58.2pc.

This is not a time for the ECB to raise rates. It has repeated the error made in mid-2008 when it tightened into the final phase of an oil shock, when half the eurozone was already in recession. Once is careless, twice is unforgivable.

Italy has eschewed the maelstrom until now, despite losing 30pc in unit labour competitiveness against Germany under EMU. It has lower private debt than G7 peers. Its banks dodged the US and Club Med housing bubbles. However, they lent instead to the Italian state, the third biggest debtor in the world with liabilities of 120pc of GDP, and that is now turning into the problem. For though Italy’s fiscal deficit looks small at 4.7pc of GDP, it is not small when adjusted for a moribund economy, rising rates, and the scale of the debt stock.

David Owen from Jefferies Fixed Income says the “elephant in the room” is that Italy’s debt interest payments will explode within three or four years if the average borrowing cost ratchets up 200 or 300 basis points. The apparently stable debt trajectory will take an entirely different shape. That is the fear now stalking markets.

It is almost pointless trying to establish exactly why this latest bout of contagion has erupted. You can blame Moody’s for its downgrade of Portugal, or blame Germany’s Krieg against private investors for forcing Moody’s to act the way it did. The deeper cause lies in the entire machinery of wreckage created by the Maastricht process since the mid-1990s.

A full-throttle global recovery would mitigate this; a half-decade of super-easy money by the ECB to weaken the overvalued euro and stave off debt deflation would help, too. Without either, Italy and Spain can only pray for a miracle.

Italy and Spain must pray for a miracle
http://endtimeinfo.com/2011/07/italy-and-spain-must-pray-for-a-miracle/
debt crisisEUEuropeItalySpain
Previous ArticlePutin brands US as ‘hooligans’ for printing moneyNext ArticleThe ‘social X-ray’ glasses that let you know exactly what another person is thinking