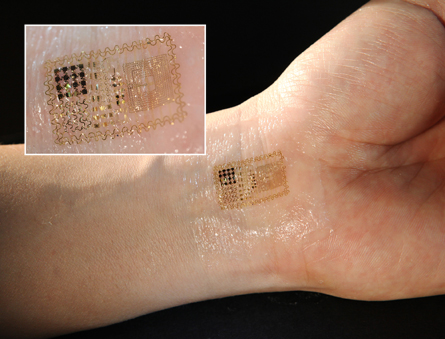 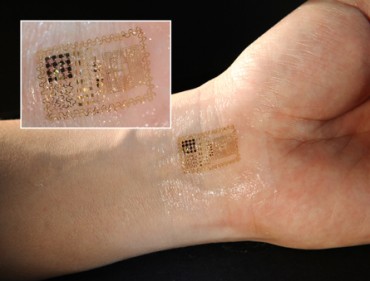 A hair-thin electronic patch that adheres to the skin like a temporary tattoo could transform medical sensing, computer gaming and even spy operations, according to a US study published Thursday.

The micro-electronics technology, called an epidermal electronic system (EES), was developed by an international team of researchers from the United States, China and Singapore, and is described in the journal Science.

“It’s a technology that blurs the distinction between electronics and biology,” said co-author John Rogers, a professor in materials science and engineering at the University of Illinois at Urbana-Champaign.

“Our goal was to develop an electronic technology that could integrate with the skin in a way that is mechanically and physiologically invisible to the user.”

The patch could be used instead of bulky electrodes to monitor brain, heart and muscle tissue activity and when placed on the throat it allowed users to operate a voice-activated video game with better than 90 percent accuracy.

“This type of device might provide utility for those who suffer from certain diseases of the larynx,” said Rogers. “It could also form the basis of a sub-vocal communication capability, suitable for covert or other uses.”

The wireless device is nearly weightless and requires so little power it can fuel itself with miniature solar collectors or by picking up stray or transmitted electromagnetic radiation, the study said.

Less than 50-microns thick — slightly thinner than a human hair — the devices are able to adhere to the skin without glue or sticky material.

“Forces called van der Waals interactions dominate the adhesion at the molecular level, so the electronic tattoos adhere to the skin without any glues and stay in place for hours,” said the study.

Northwestern University engineer Yonggang Huang said the patch was “as soft as the human skin.”

Rogers and Huang have been working together on the technology for the past six years. They have already designed flexible electronics for hemispherical camera sensors and are now focused on adding battery power and other energy options.

The devices might find future uses in patients with sleep apnea, babies who need neonatal care and for making electronic bandages to help skin heal from wounds and burns.