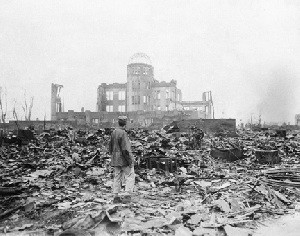 Fukushima nuclear power plant radiation recordings of external gamma radiation have been so high this week, they went off scale said veteran nuclear expert Arnie Gunderson on Thursday after the famous physicist, Dr. Chris Busby told the Japanese people this week that radioactive air contamination there is now 300 times that of Chernobyl and 1000 times the atomic bomb peak in 1963, inferring that hundreds of millions of people are now dying from Fukushima radiation, including people in the United States.

If noticing unusual amounts of hair falling out, confusion, nose bleeds or other odd symptoms typical of radiation sickness, it might be due to the United States record high levels of radiation, now multiple times acceptable safety limits not only on the west coast, but also in other locations around the nation.

Because Fukushima radiation data retrieval and interpretation has been so complex or non-existent for the concerned public, citizen reporters in Japan and United States have now established easily accessible ways to view radiation levels on the internet.

Dr Janette Sherman, a highly respected physician and acknowledged expert in radiation exposure who has reported a north-east United States 35% baby death spike since Fukushima fall-out reached the nation, concurs with estimates that world wide, the Chernobyl Kill is one million people killed to date reported NOVA News. Extrapolating, worldwide deaths by Fukushima radiation could eventually be hundreds of millions of people, becoming the most significant depopulation event to date.

Dr. Chris Busby, world famous physicist, said tests conducted at the respected Harwell Radiation Laboratory in England demonstrate that airborne radiation in Japan is 1,000 times higher than radioactive ?fallout? at the peak in 1963 of H-Bomb detonations by nuclear powers. In March, Busby had estimated that Fukushima radiation to be 72,000 times greater than what the United States released at Hiroshima.

“Let?s wipe the Tokyo Electric Power Company and the General Electric officials and policy makers off the face of the Earth, as they manifestly deserve,” asserted Dr. Busby when addressing the Japanese this week.

Dr. Busby advocates not only independent studies of the nuclear catastrophe. He received a resounding applause when he told the Japanese people this week that in his opinion, scientists who said this accident was not a problem must be prosecuted.

“Many nuclear scientists said it was not a problem when the knew it was a serious accident. People who listened to those scientists and did not run away when they should have. Because of that, people will die.”

According to Dr. Helen Caldicott, WHO’s subjugation to the nuclear industry has been widely known since May 28, 1959, when at the 12th World Health Assembly, WHO drafted an agreement with the International Atomic Energy Agency (IAEA) granting the right of prior approval over any research it might undertake or report on to the IAEA, the group many people, including some journalists, think is a neutral watchdog but is, “in fact, an advocate for the nuclear power industry.”

How the latest radiation spike at Fukushima might have been deposited and also how similar radioactive material would have been released off-site was presented this week by Gunderson, with over 25-years of experience in nuclear decommissioning oversight, co-authored the first edition of the Department Of Energy (DOE) Decommissioning Handbook. (See embedded Vimeo, “Lethal Levels of Radiation at Fukushima: What Are the Implications?“, Arnie Gunderson, Fairwinds)

Gunderson noted that over 1000 REMs were released according to TEPCO earlier this week, an amount that, “if there, would mean death within a couple of days.””Those kinds of exposures cause extensive neurological breakdowns that can’t be reversed medically,” Gunderson reported.

“To be anywhere near that for a couple of minutes would be a death sentence.”

Gunderson has questioned how this hot spot could have been missed over 100 days.

“Earlier site maps do not show this high concentration of radioactivity in that area,” he said. “More likely that this event happened over time. This radiation built up over time.”

Gunderson said he wanted to put that into perspective and let the public know what is happening, saying the key is that it occurred in a vent.

According to Gunderson, over the next ten years, there will be continued spikes in radiation on site, first where places bulldozed actually come to the surface in excavations.

“There will continue to be enormous radioactive sources that are unearthed,” he said.”When they get into these buildings to actually try to dismantle the plant, they are going to find even higher radiation levels than this one.”

“At the bottom of the plant, the nuclear core has leaked out and is now lying like a pancake on the concrete floor, working its way down, but probably not through the concrete.”

According to Gunderson, the bottom if the plant has even much more radioactive material leaking than the recent off-the-scale recordings.

“It’s going to take ten or twenty years to clean up,” he said.

As Americans struggle to survive amid the economic depression, Obama has allocated 39 billion dollars for the U.S. nuclear power industry, an industry that peace and justice human rights defender Dr. Caldicott has called “nuclear insanity” and the “Destroyer of Worlds.”