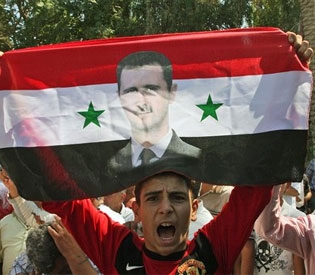 The Obama administration is laying the groundwork for yet another war that America does not want and cannot afford by mirroring precisely what preceded the bombardment of Libya in officially calling for Syrian President Bashar al-Assad to step down. ?President Obama and the leaders of Germany, Britain, France and Canada called Thursday for Syria?s president, Bashar al-Assad, to give up power,? reports the New York Times. ?The choreographed move follows months of popular protests and deadly reprisals in Syria.?

The announcement was preceded by the UN?s move to pull all non-essential staff and dozens of families of expatriate workers from Syria yesterday.

Obama?s demand that Assad step aside is exactly what happened prior to the bombardment of Libya. On February 26, Obama called on Gaddafi to give up power. Three weeks later, US B-2 bombers were attacking Libyan airfields.

Who exactly do Obama and the rest of the NATO leaders think they are kidding when they make veiled threats to Assad and demand he relinquish power? After assuring the world that the campaign to topple Gaddafi would take?days, not weeks,? NATO forces and their Al-Qaeda rebel allies have still failed to achieve such an outcome five months down the line.

Of course, there are dictators all over the world abusing and oppressing their people, but isn?t it interesting that NATO only feels necessary to intervene in countries that are resource rich and/or strategically located?

Libya was the jewel in the crown when it came to oil wealth in Africa. In the case of Syria, Russian envoy to NATO Dmitry Rogozin has warnedthat NATO?s plan to attack the country is part of a build-up that will eventually target Iran and lead to ?a large-scale war in this huge region?.

The build-up to war is undoubtedly connected to the Palestinian bid to achieve full statehood at the UN in early September. Rumors have been flying around intelligence circles for weeks that the United States and/or Israel would launch a new conflict in order to derail the UN vote.

Last week, former French General Jean Rannou told the EU Observer that a military assault on Syria was ?feasible? and that Syria wouldn?t be able to offer much in the way of resistance, but this was also what we heard about Gaddafi?s Libya back in March.

?Syrians want change. But whether Westerners believe it or not, most people in Damascus, in Aleppo, the middle classes, the merchant classes and the [sectarian] minorities believe Assad is the only person who can bring in reforms,? he said. ?They fear two things above all else ? civil war and Western intervention ? They would like to avoid the example of Libya because it would lead them into civil war,? said Crooke.

As Tony Cartalucci has documented, it appears as though the establishment press is mirroring how it embellished accounts of Gaddafi?s brutality in an effort to exaggerate the horror of Assad?s crackdown, as the west is prepared for yet another war even as America?s economy and those of major powers in Europe begin to crumble.