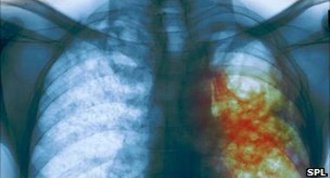 Via The Globe & Mail

Multidrug-resistant and extensively drug-resistant forms of tuberculosis are spreading at an alarming rate in Europe and will kill thousands unless health authorities halt the pandemic, the World Health Organization said on Wednesday.

Launching a new regional plan to find, diagnose and treat cases of the airborne infectious disease more effectively, the WHO?s European director warned that complacency had allowed a resurgence of TB and failure to tackle it now would mean huge human and economic costs in the future.

?TB is an old disease that never went away, and now it is evolving with a vengeance,? said Zsuzsanna Jakab, the WHO?s Regional Director for Europe.

?The numbers are scary,? Lucica Ditiu, executive secretary of the Stop TB Partnership told a news conference in London. ?This is a very dramatic situation.?

TB is currently a worldwide pandemic that kills around 1.7 million people a year. The infection is caused by the bacterium Mycobacterium tuberculosis and destroys patients? lung tissue, causing them to cough up the bacteria, which then spreads through the air and can be inhaled by others.

Cases of multidrug-resistant (MDR-TB) and extensively drug-resistant TB (XDR-TB) ? where the infections are resistant to first-line and then second-line antibiotic treatments ? are spreading fast, with about 440,000 new patients every year around the world.

According to the WHO and Stop TB, 15 of the 27 countries with the highest burden of MDR-TB are in the WHO?s European region, which includes 53 countries in Europe and Central Asia.

More than 80,000 MDR-TB cases occur in the region each year ? almost a fifth of the world?s total. The WHO said precise figures for XDR-TB are not available because most countries lack the facilities to diagnose it, but officially reported cases of XDR-TB increased six-fold between 2008 and 2009.

Rates are highest in eastern Europe and Central Asia, but many countries in western Europe have increasing rates of TB and drug-resistant TB, Ditiu said. Britain?s capital, London, has the highest TB rate of any capital city in western Europe with around 3,500 cases a year, 2 per cent of which are MDR-TB.

Treating even normal TB is a long and unpleasant process, with patients needing to take a combination of powerful antibiotics for 6 months. Many patients fail to correctly complete the course of medicines, a factor which has fuelled a rise in drug-resistant forms of the disease.

Treatment regimes for MDR-TB and XDR-TB can stretch into two or more years, costing up to $16,000 in drugs alone and up to $200,000 to $300,000 per patient if isolation hospital costs, medical care and other resources are taken into account.

The WHO?s action plan for tackling tuberculosis emphasizes the need for doctors and patients to be more aware of the disease and its symptoms, to diagnose and treat cases promptly with the right drugs, and follow patients up over many months or years to ensure they take their medications.

If that doesn?t happen ?not only are these people quietly and painfully dying, they are also spreading the disease,? Ditiu said.

The WHO said that if the plan is fully implemented ? at an estimated cost of $5-billion ? 127,000 people will be successfully treated for drug-resistant TB and 120,000 deaths will be averted by 2015.

The cost would also be recouped, since 250 000 MDR-TB and 13,000 XDR-TB cases will be prevented, saving $7- billion in averted treatment costs, the WHO said. It added that prevention of premature deaths among TB patients would add to economic productivity in the region and generate an extra $5 billion.

Dangerous TB spreading at ?scary? rate in Europe
http://endtimeinfo.com/2011/09/dangerous-tb-spreading-at-%e2%80%98scary%e2%80%99-rate-in-europe/
bacteriabioengineeringpestilenceTBtuberculosis
Previous ArticleNervous Breakdown? 21 Signs That Something Big Is About To Happen In The Financial WorldNext ArticleBen “Big Brother” Bernanke Goes Watergate, Prepares To Eavesdrop On Everything Mentioning The Fed