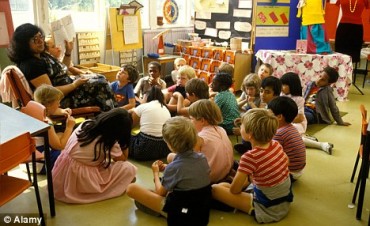 More than 20,000 pupils aged 11 or younger were last year put on record for so-called hate crimes such as using the word ?gaylord?. Some of them are even from nursery schools where children are no older than three.

One youngster was accused of being racist for calling a boy ?broccoli head? and another was said to be homophobic for telling a teacher ?this work is gay?.

Two primary school children were reported for homophobia after quarrelling over a rubber and calling each other ?gay?  and ?lesbian?. Those youngsters reported for petty offences at nursery classes included four in the London borough of Tower Hamlets and three in Hertfordshire. Schools are forced to report the language to education authorities, which keep a register of incidents.

Although the Department for Education recently pledged to cut unnecessary red tape and bureaucracy, it has given no guidance on such ?offences?.

In total, 34,000 nursery, primary and secondary pupils were effectively classed as bigots because of anti-bullying rules. The school can keep the pupil?s name and ?crime? on file.

The record can be passed from primaries to secondaries or when a pupil moves between schools.

And if schools are asked for a pupil reference by a future employer or a university, the record could be used as the basis for it, meaning the pettiest of incidents has the potential to blight a child for life.

Figures for the year 2009-10 were obtained under the Freedom of Information Act by the civil liberties group the Manifesto Club.

Adrian Hart, of the Manifesto Club, called for the Government to roll back the policy of hate speech reporting in schools. He said: ?Children need space to play and to learn the meaning of words, without being reported to the local education authority.

?These policies are an inappropriate intervention into playground life, and undermine teachers? ability to set a moral example to children and to teach them right from wrong.

?There is a world of difference between racist abuse and primary school playground spats.? The figures show 34,000 racist incidents reported by schools to local education authorities in England and Wales. Of these, 20,000 were at primary schools.

Last year, Birmingham City Council had the highest number, with 1,090 racist incidents, followed by 672 in Leeds and 567 in Hertfordshire. In West Berkshire there were just 15. In the majority of cases, the ?racist? spats involved name-calling.

Schools were required by the Labour government in 2002 to monitor and report all racist incidents to their local authority. Teachers must name the alleged perpetrator and victim and spell out the incident and the punishment. Local authority records show the type of incident but not the name of the child involved.

LEAs are expected to monitor the number of incidents, look for patterns and plan measures to tackle any perceived problems.

Heads who send in ?nil? returns are criticised for ?under-reporting?.

A DfE spokesman said: ?Parents expect that heads take a very tough line on any poor behaviour and stamp out bullying ? that?s why we?re toughening up teachers? disciplinary powers.

?It is down to schools themselves to exercise their own common sense and professional judgment about the best way of taking on bullies.?