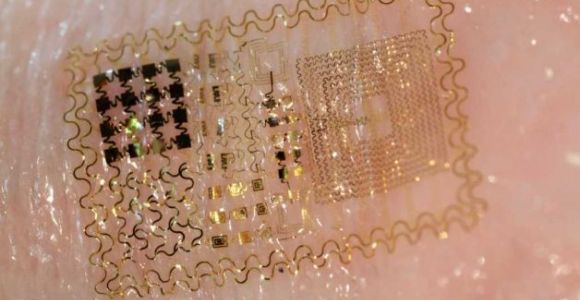 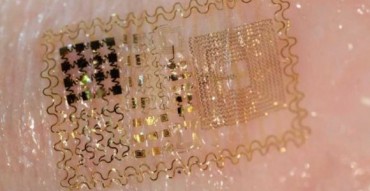 Being microchipped is now being spun as a method of protecting the health of hospital patients. To help mask the practice of this bodily invasion with a trendy, high-tech appearance, microchipping sensors are being referred to as ?electronic tattoos? that can attach to human skin and stretch and move without breaking.

Supposedly the comparisons of this hair-thin electronic patch-like chip to an electronic tattoo are being made because of how it adheres to the skin like a temporary tattoo using only water.

The small chip is less than 50 micrometers thick, which is thinner in diameter than a human hair. It is being marketed as a ?safe? and easy way to temporarily monitor the heart and brain in patients while replacing bulky medical equipment currently being used in hospitals.

This device uses micro-electronics technology called an epidermal electronic system (EES) and is said to be a development that will ?transform? medical sensing technology, computer gaming and even spy operations, according to a study published last week.

The hair-thin chip was developed by an international team of researchers from the United States, China and Singapore and is described in the Journal of Science.

The proven link between animal microchipping and cancer

Pet microchips have become increasingly common over the past few years. These chips are marked with a small barcode that can be scanned just like the tags on grocery items.

This seems to suggest that microchips are meant to turn the wearer into an object that can be tracked and catalogued. Once inserted in an animal, the chip stays there for the entirety of its lifetime and can be used to identify the pet if it should be found on the street or turned into a shelter. The subdermal chips are often recommended by vets and animal care experts as a way to ensure lost pets find their way home again.

But research suggests that despite their proclaimed usefulness, pet microchips may cause cancer. Multiple studies have clearly linked pet microchips with increased incidence of cancer and tumors in mice and rats.

In the past, public disclosure of these suggested links between microchipping and cancer in animals stirred widespread concern over the safety of implantable microchips in living beings. The animal microchip study findings that created such an uproar were so persuasive that Dr. Robert Benezra, head of the Cancer Biology Genetics Program at the Memorial Sloan-Kettering Cancer Center in New York, was quoted in an article about microchipping as saying, ?There?s no way in the world, having read this information, that I would have one of those chips implanted in my skin, or in one of my family members.?

A 2001 study found that 1% of rats with implanted microchips developed cancerous tumors near the chip location. At least a dozen animal studies have been done between 1990 and 2007 and most concluded that microchips significantly increased the risk of cancer at the microchip site.

All the electronic parts of the new EES chip are built out of wavy, snake-like components which allow them to be stretched and squeezed. They also contain tiny solar cells which can generate power or get energy from electromagnetic radiation. The sensor is mounted on to a water-soluble sheet of plastic and attached to the body by brushing the surface with water ? hence the comparison to a temporary tattoo.

This new device being implanted in hospital patients certainly looks and acts like a microchip ? yet it is persistently being referred to as an ?electronic tattoo? in order to make the concept appear harmless, friendly ? even trendy!

Invasive microchips ? is the cost worth the convenience?

Scientists claim the supposed advantage of the EES chips is their ability to cut back on the bevy of wires, gel-coated sticky pads and monitors that are currently relied on to keep track of the vital signs of hospital patients. Apparently these traditional forms of bulky equipment and monitors are overly ?distressing? to patients.

It appears scientists believe these new microchips are convenient enough that they outweigh the potential risks.

In test trials, the microchip was purposefully attached to the throat of a human and used to detect differences in words such as up, down, left, right, go and stop. Researchers used these functions to control a simple computer game.

Is the convenience of not having to manually operate equipment great enough to justify the implantation of an electronic sensor beneath the skin of humans? Would you trust a microchip to monitor your bodily functions without causing health hazards in the process?

The future of America: microchipped zombies

Researchers believe the technology could be used to replace traditional wires and cables, but this sounds remarkably like an excuse used to cover up the real truth: that this new microchipping method is a way to ensure all of us are eventually microchipped and able to be tracked and monitored. Soon, everyone will be required to wear chips or ?tattoos? that prove they got their vaccinations, to link to health records, credit history and social security records.

If the government can require Americans to carry microchipped documents including your work, financial and health records, it seems it is only a matter of time before these chips will be implanted for the sake of ?convenience? or ?security.? According to them, all of this is being done ?for our own good.?