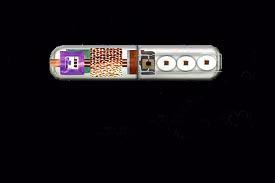 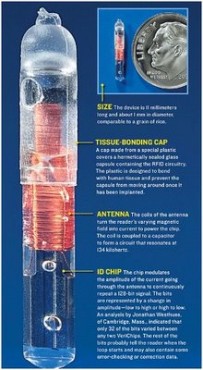 Positioned as the solution to eliminating identify theft, lost wallets and purses, and a host of other information breaches, the all-inclusive implantable RFID tracking chip is gaining momentum for widespread implementation. News reports indicate that an RFID tracking chip capable of killing humans has already been invented.

There is simply no denying the fact that “the powers that be” are working towards microchipping all of humanity. Countless news reports, including those compiled in the following YouTube clip, openly speak of microchips designed for implant into human skin:
http://www.youtube.com/watch?v=yl2L…

But what many people do not realize is that this technology exists now, and has already been approved by the US Food and Drug Administration (FDA) for use in humans. Not only do these chips “silently and invisibly” store and transmit personal data, but they can also be encoded to perform a variety of other functions (http://arstechnica.com/old/content/…).

Beginning at 00:42, the YouTube clip contains a segment on a “killer” RFID microchip that, upon being remotely triggered, can send a lethal dose of cyanide into a person’s skin. The FOX News reporter that introduces the segment can be heard saying that the chip “will kill you if you get out of line” (http://www.youtube.com/watch?v=yl2L…).

The Saudi inventor who originally developed this type of RFID-chip has applied for a patent in Germany and was refused on the grounds that it was unethical and/or a danger to the public.

It then became known as the Killer Chip.   The device is designed to emit encrypted radio waves that would be picked up by satellites and “used to track fugitives from justice, terrorists, illegal immigrants, criminals, political opponents and more.

Later in the YouTube compilation around 04:45, Chairman and CEO of Applied Digital Solutions Scott Silverman, who happens to have a “VeriChip” in his own arm, promotes the technology as useful and beneficial during a CNBC segment. Several of the hosts can be heard questioning Silverman about the “slippery slope” of the technology, and how it could be used to control the world’s populations.

The PositiveID Corporation, which produces the VeriChip, has also announced that the Israeli Military recently ordered implantable microchips for its soldiers. The stated reason for this is that the chips will supposedly aid in “disaster preparedness and emergency management” (http://www.rfidnews.org/2011/10/11/…).
Implantable chips are becoming common, the public is slowly getting used to the idea and its many ?benefits?, so when the time comes to move these chips from your wallet to your body most people will regard it as a necessary step of an unavoidable process.