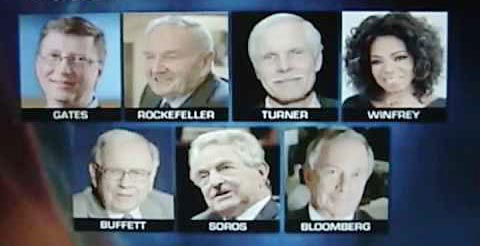 The topic of depopulation is not mentioned in the Bible, however, we feel it is important to know about these efforts and the evil intentions and dark nature of the power elite. We also know that people will more readily believe a lie with some truth or the appearance of truth mixed in it, that is why some well meaning individuals fell prey to some of the ideas.

We think and pray that these initiatives will not succeed, but it is important to know about them as all of us are or will be effected in some way.

?And God blessed them, and God said unto them, Be fruitful, and multiply, and replenish the earth, and subdue it: and have dominion over the fish of the sea, and over the fowl of the air, and over every living thing that moveth upon the earth.? ? Genesis 1:28

?Ye are of your father the devil, and the lusts of your father ye will do. He was a murderer from the beginning, and abode not in the truth, because there is no truth in him. When he speaketh a lie, he speaketh of his own: for he is a liar, and the father of it.? ? John 8:44

Via End of the American Dream

The United Nations has officially designated October 31st as 7 Billion Day.  On that day, the United Nations estimates that the population of the earth will hit 7 billion for the very first time.  But instead of celebrating what a milestone 7 billion people represents, the UNPF is focusing instead on using October 31st to raise awareness about “sustainability” and “sustainable development”.  In other words, the United Nations is once again declaring that there are way too many people on the planet and that we need to take more direct measures to reduce fertility.  In recent years, the UN and other international organizations have become bolder about trying to push the sick population control agenda of the global elite.  Most of the time organizations such as the UN will simply talk about “stabilizing” the global population, but as you will see in this article, there are many among the global elite that are not afraid to openly talk about a goal of reducing the population of the world to 500 million (or less).  To you and I it may seem like insanity to want to get rid of more than 90 percent of the global population, but there is a growing consensus among the global elite that this is absolutely necessary for the good of the planet.

As we approach October 31st, dozens of articles are appearing in newspapers all over the globe that are declaring what a horrible thing it is that we are up to 7 billion people.

In fact, it surely is no accident that the United Nations put 7 Billion Day on the exact same day as Halloween.  Perhaps they want to highlight how “scary” it is that we have 7 billion people on the planet, or perhaps they are trying to send us a message by having 7 Billion Day occur on the same day as “the festival of death”.

So what precisely is considered to be an ideal population for the earth by those pushing “sustainable development”?

Well, of course there is much disagreement on this issue, but many are very open about the fact that they believe that the earth should only have 500 million people (or less) on it.

For example, the first of the “new 10 commandments” on the infamous Georgia Guidestones states the following….

Dave Foreman, the co-founder of Earth First, says that reducing our population down to 100 million is one of his three main goals….

“My three main goals would be to reduce human population to about 100 million worldwide, destroy the industrial infrastructure and see wilderness, with its full complement of species, returning throughout the world.”

Sadly, this kind of garbage is even being taught at major U.S. universities.  For example, Professor of Biology at the University of Texas at Austin Eric R. Pianka once wrote the following….

I do not bear any ill will toward people. However, I am convinced that the world, including all humanity, WOULD clearly be much better off without so many of us.

“The world today has 6.8 billion people. That’s heading up to about nine billion. Now if we do a really great job on new vaccines, health care, reproductive health services, we could lower that by perhaps 10 or 15 percent.”

Mikhail Gorbachev thinks that reducing the global population by 90 percent would be just about right….

But most of the time, the way that the global elite speak of population control is much more “politically correct”.  They tend to use terms such as “sustainable development” and “reduction of fertility rates” and “quality of life” when discussing the need to reduce our population.

But most of the time, the way that the global elite speak of population control is much more “politically correct”.  They tend to use terms such as “sustainable development” and “reduction of fertility rates” and “quality of life” when discussing the need to reduce our population.

As 7 Billion Day has approached, there have been articles popping up in major publications all over the globe that are advocating increased population control measures.  Of course in the western world such measures are always framed as being “voluntary”, but that is the way that they always introduce things like this.  Once enough people get on board with the “voluntary” population control measures they will become “mandatory”.

In a recent article for the Guardian, Roger Martin stated that all of the problems that humanity is facing would be easier to solve if less people were running around the planet….

“…all environmental (and many economic and social) problems are easier to solve with fewer people, and ultimately impossible with ever more.”

He also says that if we reduce the population, it will mean better lives for all the rest of us….

“On a finite planet, the optimum population providing the best quality of life for all, is clearly much smaller than the maximum, permitting bare survival. The more we are, the less for each; fewer people mean better lives.”

But is that really the case?

There has been tremendous human suffering all throughout history.  If we eliminated 90 percent of the global population it would not suddenly usher in some kind of “golden age”.

Many among the global elite are truly convinced that we are spoiling “their planet” and they don’t want so many of us around anymore.  Thanks to technology, they only need a few hundred million people to run their system, and they view the rest of us as “useless eaters”.

We are starting to see an increasing number of people in the western world actually suggest that we adopt a “one-child policy” such as China has.  For example, the following is from an opinion piece that appeared in the National Post….

A planetary law, such as China’s one-child policy, is the only way to reverse the disastrous global birthrate currently, which is one million births every four days.

The author of the opinion piece believes that such a “one-child policy” would reduce the global population to 3.43 billion by 2075.

When you believe that the earth has way too many people, human life becomes cheap, and abortion becomes a way to get rid of undesirables.

In the end, our “voluntary” actions are not going to be nearly enough to reduce the population and most population control advocates realize that.  Many of them are openly calling for a “benevolent” global authority to take charge to lead us through the “necessary” transition that is ahead.

This is the endgame for the radical green agenda.  In order to save the earth, they feel as though they must dramatically reduce our numbers and very tightly control our activities.

But is that the kind of future that anyone would actually want to live in?  Would anyone actually choose to live in a future where bureaucrats micromanage our lives for the good of the environment?