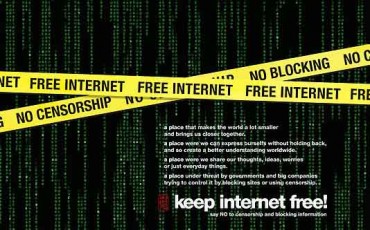 On Monday, David Cameron went before an international cyberspace conference in London and said it was ?essential to strike a balance between the needs of online security and the right to free expression.?

?We cannot leave cyberspace open to the criminals and the terrorists that threaten our security and our prosperity but at the same time we cannot just go down the heavy-handed route,? he said.

John Kampfner, the chief executive of the Index on Censorship, clarified Cameron?s comments:

?It?s very easy to defend the case of black and white ? human rights against dictatorships around the world. But as soon as our own Western-style stability of the state is called into question, well then freedom of expression is expendable. There should be one rule for all including Western governments.?

Cameron?s comments are viewed as a response to China and Russia. Both countries have pushed for tighter regulation of the internet through binding international treaties.

In the United States, the government has used a mostly phantom cyber threat to call for draconian legislation to control the internet. In January, Sens. Joseph Lieberman (I-Conn.) and Susan Collins (R-Maine) renewed their call for an ?internet kill switch? that would allow the president to shut down the internet in response to a national emergency.