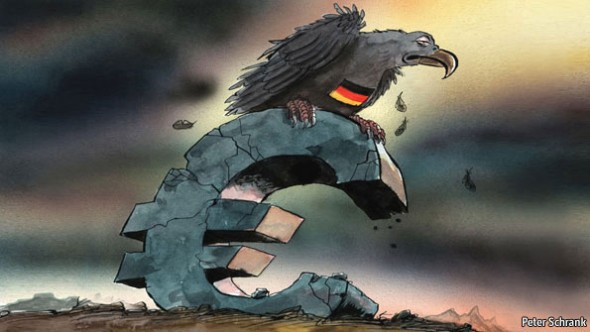 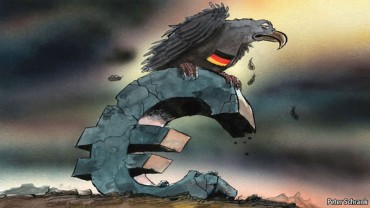 Investors began to fear the worst for the euro after unusually weak demand at an auction for bonds from Germany, the region?s largest economy. One analyst went so far as to put the currency on a ?death watch.?

Germany sold just 60 percent of the 6 billion euros in 10-year bunds it brought to auction, about the weakest demand seen for the country?s debt in the currency?s 16-year history, economists said. The rejection of debt from Europe?s safe harbor marks a new stage for the crisis.

?No bunds wanted equals no Euros wanted equals the Euro death watch,? wrote Mark Steele, an analyst with BMO Capital Markets. ?We have seen many poor German auctions. This is not the issue. The issue is how badly the euro is doing after the weak auction.?

The Euro fell more than 1 percent against the dollar to a 7-week low against the Greenback. The currency threatened to break through the October lows that came amid the height of turmoil in Italy and Greece. Both countries would go on to install new Technocrat leaders, lifting confidence in the currency briefly.

The European Financial Stability Facility does not give the European Central Bank the same firepower or freedom of the Federal Reserve, which it utilized in the aftermath of the U.S. credit crisis with two rounds of massive purchases of Treasurys (QE). Germany has been reluctant to follow the Fed?s lead and buy up other countries bad debt because of fear over inflation.

German Chancellor ?Merkel has been opposed to using the ECB as a monetizer of debt,? said Dennis Gartman of The Gartman Letter. ?Germany doesn?t even like to think in these terms, but they may not have a choice.?

Recent reports have hinted at different workarounds of the euro treaty being discussed to effectively replicate quantitative easing in Europe. One option discussed was for the ECB to lend money to the IMF, which in turn would buy the toxic debt before it could spread to yet another country.

?It?s too late for a bazooka,? said Mitchell Goldberg, president of ClientFirst Strategy. ?Now we need inter-continental ballistic missiles. This is getting worse very quickly.?

Investors had kept buying German bonds as they fled crisis after crisis in the region: first in Ireland, then in Greece and Italy, and now in Spain and Belgium. But Wednesday, 10-year bunds dropped significantly after the failed auction, pushing the yields above 2.05 percent, but perhaps more importantly above the U.S. treasury with the same maturity for the first time since early October.

?We are seeing the end of the euro currency as we know it,? said Brian Stutland of Stutland Volatility Group. ?I don’t see a single thing that causes the euro to rally other than the Fed announcing a ?QE3? in which they buy euro foreign debt.?