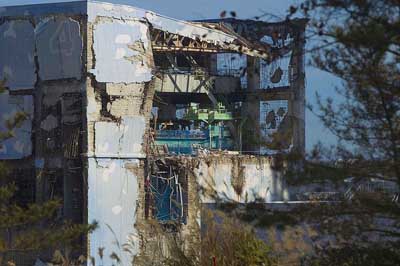 On November 17, the architect of Fukushima Daiichi Reactor 3, Uehara Haruo, was interviewed in Japan. He warned that a ?China Syndrome? situation is inevitable at the plant.

Haruo said that considering eight months have passed since the tsunami and the crippling of the nuclear plant without any improvement in the condition of the reactors, it is likely melted fuel has escaped the container vessel and is now burning through the earth.

On September 20, 2011, Hiroaki Koide, assistant professor at Kyoto University?s Research Reactor Institute, estimated that material from the nuclear fuel rods may be twelve meters deep underground at reactors one and three.

If the fuel reaches an underground water source, Haruo explained, it will result in the contamination of water, soil and the sea. More catastrophic, underground super-heated water will ultimately create a massive hydrovolcanic explosion.

Although media in Japan and the alternative media have covered this story over the last few days, it has been uniformly ignored by the corporate media.

Fukushima is no longer news worthy. Instead, the corporate media has turned its attention to Rob Kardashian and Dancing with the Stars and the other major distraction that is likely to persist through the holidays, the re-opened 30 year old murder investigation of actress Natalie Wood.