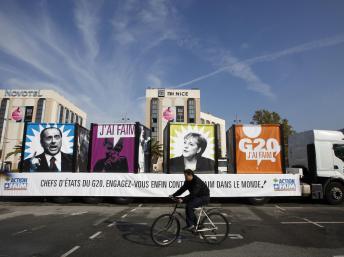 Do you hear that sound? It is the sound of Europe being hit with a cold dose of financial reality. The air has been let out of the balloon, and investors all over the world are realizing that absolutely nothing has been solved in Europe. The solutions being proposed by the politicians in Europe are just going to make things worse. You don’t solve a sovereign debt crisis by shredding confidence in sovereign debt. But that is exactly what the “voluntary 50% haircut” has done. You don’t solve a sovereign debt crisis by pumping up your “bailout fund” with borrowed money from China, Russia and Brazil. More debt is just going to make things even worse down the road. You don’t solve a sovereign debt crisis by causing a massive credit crunch. By giving European banks only until June 2012 to dramatically improve their credit ratios, it is going to force many of them to seriously cut back on lending. A massive credit crunch would significantly slow down economic activity in Europe and that is about the last thing that the Europeans need right now. If the deal that was reached last week was the “best shot” that Europe has got, then we are all in for a world of hurt.

On Monday, investors all over the globe began to understand the situation that we are now facing. The Dow was down 276 points, and the euphoria of late last week had almost entirely dissipated.

But much more important is what is happening to European bonds.

Investors are reacting very negatively to the European debt deal by demanding higher returns on bonds.

Perhaps the most important financial number in the world right now is the yield on 10 year Italian bonds.

The yield on 10 year Italian bonds is up over 6 percent, and the 6 percent mark is a key psychological barrier. If it stays above this mark or goes even higher, that is going to mean big trouble for Italy.

The Italian government just can’t afford for debt to be this expensive. The higher the yield on 10 year bonds goes, the worse things are going to be for Italy financially.

Of course it was completely and totally predictable that this would happen as a result of the “voluntary 50% haircut” that is being forced on private Greek bondholders, but the politicians over in Europe decided to go this route anyway.

Major Italian banks also got hammered on Monday. The following is how a CNN article described the carnage….

Shares of UniCredit, the largest bank in Italy, sunk more than 4% on Friday in Milan and were down nearly another 6% Monday. Intesa, the second-largest Italian bank, slipped 7% Monday, while Mediobanca, Italy’s third-largest financial institution, fell about 4%.

That is why Italy is so vitally important.

Another EU nation to watch closely is Portugal.

The yield on 2 year Portuguese bonds is now over 18 percent. A year ago, the yield on those bonds was about 4 percent.

In many ways, Portugal is in even worse shape than Greece.

A recent article by Ambrose Evans-Pritchard discussed the debt problems that Portugal is faced with. The following statistic was quite eye-opening for me….

Portugal?s public and private debt will reach 360pc of GDP by next year, far higher than in Greece.

Like Greece, Portugal is essentially insolvent at this point. Their current financial situation is unsustainable and politicians in Portugal are already suggesting that they should be able to get a “sweet deal” similar to what Greece just got.

You see, the truth is that what this Greek debt deal has done is that it has opened up Pandora’s Box. Most of the financially troubled nations in Europe are eventually going to want a “deal”, and this uncertainty is going to drive investors crazy.

There is very little positive that can be said about this debt deal. It has bought Europe a few months perhaps, but that is about it.

As the new week dawned, financial professionals all over the globe were harshly criticizing this deal….

*The CEO of TrimTabs Investment Research, Charles Biderman, says that the big problem with this deal is that the fundamental issues have not been addressed….

“The euphoria about the latest euro zone bailout will fade quickly, as investors realize that the underlying solvency issues have not been addressed”

*Bob Janjuah of Nomura Securities International in London was even harsher….

“This latest round of euro zone shock and awe is, in my view, nothing more than a confidence trick and has possibly even set up an even worse financial outcome.”

In fact, Janjuah says that the debt deal is essentially a “Ponzi scheme”….

This latest bailout relies on the market not calling what I see is a huge “bluff”, because if the market does call it, the bailout simply won’t be credible or even deliverable. It is instead akin to a self-referencing ponzi scheme, and I can’t believe eurozone policymakers have even considered going down this route. After all, we all have recent experience of how such ponzi schemes end, and we all remember how eurozone officials often belittled and berated US policymakers for their role in the US housing/CDO/SIV financial bubble.

*The chief economist at High Frequency Economics, Carl Weinberg, is calling the European debt deal a scheme “of Madoffian proportions“….

“Now they (EU Leaders) are keen to tap into resources that are not their own to fund this crazy scheme of guarantees, leveraged off guarantees to sell bonds and bank shares that no one may want to buy, (in order) to restore value in the banking system destroyed by other bonds that no one wants to own right now. This is a construct of Madoffian proportions”

Of course with Soros there is always an agenda and you never know what his motives are. Perhaps he is honestly concerned about the financial health of Europe, or perhaps he is trying to feed the panic to get Europe to crash even faster. With Soros you never really know what he is up to.

In any event, the crisis in Europe is already claiming financial casualties in the United States.

As a recent CNBC article noted, the firm failed because of bad debts on European sovereign debt….

The bankruptcy protection filing from MF Global ? a mid-sized trading firm run by former New Jersey Gov. and Goldman Sachs CEO Jon Corzine ? only helped amplify the realization that more difficulties remain. MF Global got into trouble mainly because Corzine made tragically wrong bets on European sovereigns that unraveled when it became clear that bondholders of Greek debt will not be made whole as the nation tries to make its way out of its fiscal morass.

As time goes on, there will be more financial casualties. The truth is that someone is going to pay the price for the financial foolishness of these countries in Europe.

Politicians in Europe did not want to increase the “bailout fund” with any of their own money, so they are going to go crawling to China, Russia and Brazil and beg those countries to lend them huge amounts of money.

This is incredibly foolish, and it is already fairly clear that China is going to play hardball with Europe. China has Europe exactly where China wants them, and China will likely demand all sorts of crazy things before they will lend Europe any cash for this bailout fund.

As a recent CNN article noted, Europe is going to be in a lot of trouble if they can’t get money out of China, Russia and Brazil….

The hope is that China and other sovereign wealth fund will invest in new special vehicles that will allow the EFSF to add leverage to increase the amount of funding available.

Without the help of China, Brazil, Russia and others, Europe is back where it started. And it still seems clear that the stronger northern European nations aren’t keen on the idea of a full bailout of their southern siblings.

It is a comedy of errors for the politicians over in Europe. They can’t seem to get anything right. In fact, everything that they do seems to make a financial collapse in Europe even more likely.

A massive financial storm is coming to Europe.

It is going to rock the entire globe.

Now is the time to make certain that your financial house is not built on a foundation of sand. Get your assets into safe places and keep them safe because the road ahead is going to be quite rocky.

The Air Has Been Let Out of the Balloon
http://endtimeinfo.com/2011/11/the-air-has-been-let-out-of-the-balloon/
bailoutEUEuropean Unionfinancial crashGreeceItaly
Previous ArticleWill Greece Pull an Iceland ? And Tell the Banks to Pound Sand?Next ArticleMore Signs Israel Preparing To Launch Attack