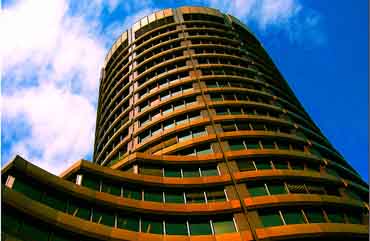 The Bank for International Settlements Sunday issued an oblique endorsement of coordinated action by the world’s largest central banks to ease funding conditions for banks. “A freezing of interbank markets in major funding currencies, as during the recent crisis, may require the ability to supply official liquidity in major currencies in an elastic manner,” the BIS wrote in its regular quarterly report.” ? MarketWatch

Dominant Social Theme: Inflate! And everything will work out.

Free-Market Analysis: We’ve already indicated that we believe the Anglosphere power elite is attempting to create a kind of Great Depression in order to ease the path of world government. This squib of an article in MarketWatch (excerpted above) ? unnoticed by most of the mainstream press ? only reconfirms our impression.

It endorses recent “coordinated” central banking loosening. But it does more: “A freezing of interbank markets in major funding currencies, as during the recent crisis, may require the ability to supply official liquidity in major currencies in an elastic manner.”

Think about that. The BIS, whatever it is, is all for printing lots of money. And the BIS is no small-time trade group. It is perhaps the most powerful (and least known) global business body in the world. Its mysteries are manifold. its workings are well-hidden.

Of course, somebody actually set up the Bank for International Settlements in the late 1930s. And since then someone has set up or helped set up about 200 central banks around the world, many of them reporting directly to the BIS.

But who? And how did it happen? Dunno.

Who speaks to the head of a state, asking him or her to set up a central bank? Dunno. Do you?

Why is that Libya, Afghanistan and Iraq have central banks when they didn’t before, or not the kind they do now? Did you read about it?

Meh … this ruinous financial system is not a plant or a tree. It did not grow spontaneously. It did not grow naturally. And we would submit to you that those who created it know what they’re doing.

The key as always is to pretend that one does NOT know. The key is to create cognitive dissonance. Even today, if you asked the average person-on-the-street if the powers-that-be are trying to create a Depression (let alone a hyperinflationary one), you would get the ol’ crazy look, as in … “What is this fellow … nuts?”

But, no, nothing nutty about it. The European Union and the euro are grinding a whole European generation into dust. China’s burgeoning middle class is about to get walloped if China ends up in a proverbial hard landing, as well it might. The US has NEVER recovered from the disaster of the mid-2000s (first decade) nor shall it for the foreseeable future.

Into this morass steps the BIS, with its suggestion (above) that further monetary inflation is the only viable solution to the problem that central banking itself has created.

Smile … and nod! Don’t acknowledge the reality that the ruin is a central banking ruin. The monetary decay is the result of a monopoly fiat. The great dollar expansion yet to come is also a direct outcome of the current system that was put in place after World War II.

No, it’s not hard to discern what’s going on if one simply disassociates oneself from the endless nattering of the mainstream media. Analyze what IS instead of what is SUGGESTED and the reality shall gradually become clear.

DB’s manifestly accurate High Alert (published some four years ago now) was written because we were tracking what was actually happening to the world’s economy instead of what was being reported ….

A financial hurricane is washing over America and, to a lesser extent, the entire West. To label it the “downstroke” of a super business cycle does not do it justice. These events occur in cycles, with the last one taking place in the 1970s ? a mild storm compared to what is occurring today. …

A strong inflation, even a soft hyperinflation, already has a grip on Western currencies, most notably in the United States ? as anyone who buys groceries is aware. The dollar’s plunge may be delayed by a kind of “race to the bottom” as other central banks adjust their currencies to reflect the weakness of the dollar. …

In his “Great American Depression,” free-market economist Murray Rothbard explains the ramifications of hyperinflation as follows: “Hyperinflation, on any count, is far worse than any depression: It destroys the currency ? the lifeblood of the economy; it ruins and shatters the middle class and all fixed income groups; it wreaks havoc unbounded. And furthermore it leads finally to unemployment and lower living standards since there is little point in working when earned income depreciates by the hour.”

(You can read the full book online here.)

THIS is what the BIS seems to have in mind. This is the fate that has been decreed, apparently, by those who want to crush middle classes around the world in order to create a “new world order.” Out of chaos … order. It is quite clear. Follow what IS rather than what you are being TOLD.

The BIS wants to inflate. it ENDORSES inflation. The proximate cause is the unraveling of the current financial system. But it is “their” system. They made it. They watched it rise and fall. It was obvious that it could not end in anything other than a massive contraction and perhaps hyperinflation.

The contraction ? incipient Depression ? has already taken place. Best case, the powers-that-be would stop trying to prop up failing markets and let the downturn have its way as quickly as possible. This they will not do. Instead, the next phase of an increasingly horrific scenario is about to unfold.

Rather than let the market alone, the elites are apparently readying massive central bank monetary inflation around the world. That’s the real message of this innocent little squib of an article, so far as we can tell.

The BIS, in its inoffensive way, is signaling that the current level of disaster and despair is not good enough. The agony is not sufficient. The new world order is to be birthed on the graves of millions, and nothing but hyperinflation (and/or war) will produce the sufficient level of chaos. Here’s some more from the article:

The U.S. Federal Reserve 10 days ago agreed to expand, and reduce the cost of, multilateral swap lines with five other large central banks, notably the European Central Bank, in an effort to restore access to dollar funding for European banks. Euro-zone banks used the new facility to borrow $50.7 billion at a rate of 0.59% at the first operation after the announcement.

The BIS’s essay was its latest in a series analyzing the concept of global liquidity, and focused again on the interplay between official liquidity, that is, created by central banks, and the far greater liquidity created by the private sector on the basis of central bank money–the so-called money multiplier.

The essay observed that much is still unknown on this topic, particularly on the degree to which the accumulation of foreign exchange reserves by central banks, and their subsequent reinvestment, can affect the creation of private liquidity.

The BIS noted that the priority of policymakers should be to mitigate surges in the overall level of global liquidity. It said the new “Basel III” rules on capital and liquidity should help this trend of “counter-cyclical” policymaking.

Do you appreciate what you have just read, dear reader? Do you understand the black maw of the vicious, velvet trap that is now being readied? Unlimited money printing is to be aimed at a grievously wounded world ? and the antidote is to be MORE GLOBAL REGULATION.

Over and over we see this sort of generic dominant social theme in action. Having unleashed a fear-based promotion (a new Great Depression), the elite now suggests that only their international agencies can rectify it.

So let the central banks print away! The regulators have figured it out. They’ve put into place something called Basel III. This “solution” has been initiated by the same banking community that has hollowed out the life savings of hundreds of millions; it is supposed to ensure that hyperinflation is damped and the velocity of money is damped.

Here at the Daily Bell we quantify the fear-based memes of the elite and their efficacy. We’ve kept track not only of the successes but of the failures as well. And in our view, the failures are mounting up.

Most recently we suggested that the current chaos in the Eurozone was yet another elite failure ? that ideally, Britain wouldn’t have had to pull away from the euro but would have drawn closer to the EU.

In fact, Britain’s pullback itself may be not only an acknowledgement of the troubles the elites are having in creating their one-world order, it may also be a STRATEGY ? one creating a favorite tool, the Hegelian Dialectic.

That’s how you move the socio-political discussion in the “right” direction. You need opposing sides to create first a thesis and an antithesis and then, finally … a synthesis. In this case, the current economic chaos is the thesis, and the BIS’s idea of money printing is to be the anti-thesis.

What is to be the synthesis? Well … perhaps one prints (relatively) slowly, at least at first. Of course, speed is relative. What is “slow” can soon become “faster.” The Hegelian Dialectic, in fact, is likely merely a trick designed to create a false sense of satisfaction in those who participate or follow but do not have an understanding of the grand design. No, from our point of view, the “controllers” are making it clear what is to be the next step of the “great game.”

Conclusion: Can you hear the noise? It is not a train headed down the track. It is not Superman flying through the air faster than the speed of sound. It is a printing press, running hard toward ruin.