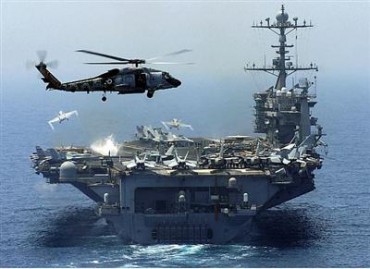 The US has provocatively sent one of its biggest warships through the Strait of Hormuz amidst Iranian wargames taking place in the region shortly after warning Iran that any closure of the key oil choke point would not be tolerated.

?A US aircraft carrier entered a zone near the Strait of Hormuz being used by the Iranian navy for wargames, an Iranian official said Thursday amid rising tensions over the key oil-transit channel,? reports YNet News.

?US officials announced Wednesday that the ship and its accompanying battle group moved through the Strait of Hormuz, a narrow stretch at the entrance to the Gulf that is the world?s most important choke point for oil shipments.?

The appearance of the warship, named as the USS John C. Stennis, half way through Iran?s 10 day wargame exercise in the region, arrives following a warning that the US would not tolerate Iran closing the Strait of Hormuz, a threat Iran has repeatedly made over the last few weeks.

As we previously reported, aside from the Stennis and its fleet of smaller battleships, the the USS Abraham Lincoln is also on its way to the US 5th fleet, as well as the USS Carl Vinson.

The presence of US warships in the region amidst escalating tensions serves as a reminder that the Bush administration once debated staging a false flag wherein fake Iranian patrol boats would be used to attack a US ship as a means of creating a pretext for war.

In January 2008, the US government announced that it had been ?moments? away from opening fire on a group of Iranian patrol boats in the Strait of Hormuz after the boats allegedly broadcast a warning that they were about to attack a US vessel.

The US claimed the Iranian boats had broadcast the message, ?I am coming at you. You will explode in a couple of minutes,? and that the order to fire was aborted only at the last minute as the patrol boats pulled back.

Iran later produced a video proving that the patrol boats never displayed any kind of threatening behavior. The New York Times subsequently reported that the alleged tape containing the attack threat had no background ambient noise and did not come from an Iranian ship, but from another unnamed ship in the region.

According to Pulitzer-Prize winning journalist Seymour Hersh, the incident led to a discussion in Vice-President Dick Cheney?s office about how to start a war with Iran by launching a false flag attack at sea.

The January Strait of Hormuz incident taught Cheney and other administration insiders that, ?If you get the right incident, the American public will support it?.

Hersh said: ?There were a dozen ideas proffered about how to trigger a war. The one that interested me the most was why don?t we build, we in ?our shipyard?, ? build four or five boats that look like Iranian PT boats. Put Navy seals on them with a lot of arms. And next time one of our boats goes to the Straits of Hormuz, start a shoot-up. Might cost some lives?.

The plan was rejected because it would have cost American lives, but the potential for a similar scenario to arise in the Strait of Hormuz, whether real or manufactured, remains a very real threat, especially given the amount of US warships that are either already in the region or on their way to the Strait.

A confrontation in the Strait of Hormuz would send oil prices skyrocketing and create global economic instability. Any closure of the Strait would make the current financial crisis look like a walk in the park.