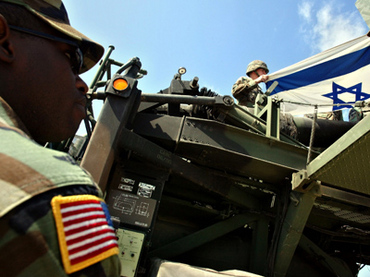 January 2, 2012. Jerusalem. In one of the most blacked-out stories in America right now, the US military is preparing to send thousands of US troops, along with US Naval anti-missile ships and accompanying support personnel, to Israel. It took forever to find a second source for confirmation of this story and both relatively mainstream media outlets are in Israel. With one source saying the military deployment and corresponding exercises are to occur in January, the source providing most of the details suggests it will occur later this spring.

Calling it not just an ?exercise?, but a ?deployment?, the Jerusalem Post quotes US Lt.-Gen Frank Gorenc, Commander of the US Third Air Force based in Germany. The US Commander visited Israel two weeks ago to confirm details for ?the deployment of several thousand American soldiers to Israel.? In an effort to respond to recent Iranian threats and counter-threats, Israel announced the largest ever missile defense exercise in its history. Now, it?s reported that the US military, including the US Navy, will be stationed throughout Israel, also taking part.

Also confirming the upcoming US-Israeli military missile exercises is JTA.org – ‘global news service of the Jewish people’. In their account, they report, ‘Last week, plans for Gen. Martin Dempsey, the chairman of the U.S. Joint Chiefs of Staff, to visit Israel in January were leaked to Israeli media; his visit likely will coincide with the largest-ever joint U.S.-Israel anti-missile exercise’.

While American troops will be stationed in Israel for an unspecified amount of time, Israeli military personnel will be added to EUCOM in Germany. EUCOM stands for United States European Command.

In preparation for anticipated Iranian missile attacks upon Israel, the US is reportedly bringing its THAAD, Terminal High Altitude Area Defense, and ship-based Aegis ballistic missile systems to Israel. The US forces will join Israeli missile defense systems like the Patriot and Arrow. The deployment comes with ?the ultimate goal of establishing joint task forces in the event of a large-scale conflict in the Middle East?.

The Jerusalem Post reports that US Lt.-Gen Frank Gorenc was in Israel meeting with his Israeli counterpart, Brig.-Gen Doron Gavish, commander of the Air Defense Division. While there, the US General visited one of Israel?s three ?Iron Dome? anti-missile outposts. The Israeli Air Force has announced plans to deploy a fourth Iron Dome system in the coming months. Additional spending increases in the Jewish state will guarantee the manufacture and deployment of three more Iron Dome systems by the end of 2012. The Israelis are hoping to eventually have at least a dozen of the anti-missile systems deployed along its northern and southern borders.

In a show of escalated tensions in the region, Iran test fired two long range missiles today. One, called the Qadar, is a powerful sea-to-shore missile. The other was an advanced surface-to-surface missile called the Nour. According to Iranian state news, the Nour is an ?advanced radar-evading, target-seeking, guided and controlled missile?. Additionally, the Iranian military reportedly test-fired numerous other short, medium and long-range missiles. Yesterday, Iranian authorities reported that they test-fired the medium-range, surface-to-air, radar-evading Mehrab missile. Today is supposed to be the final day of Iranian naval drills in the Straits of Hormuz.

Iran recently made global headlines when it threatened to blockade the Straits of Hormuz if Europe and the US went ahead with their boycott of Iranian oil and the country?s central bank. One-quarter of the world?s oil passes through that waterway every day. President Obama has announced that a closure of the Straits was unacceptable and vowed to take whatever measures are necessary to keep the vital shipping lane open.

In September, the US European Command established a radar system in Israel.

With America previously equipping Saudi Arabia and the United Arab Emirates with weaponry to wreck any chance of an Iranian nuclear weapon program from close by, the US will now have added forces on the ready in Israel and Germany under what Tehran fears is a guise being merely perpetrated as a test-run. RT reported last week that the US is equipping Saudi Arabia with nearly $30 billion F-15 war planes, a deal that comes shortly after Washington worked out a contract with Dubai to give the UAE advanced ?bunker buster? bombs that could decimate underground nuclear operations in neighboring Iran.

Since the US surveillance mission over Iran that left overseas intelligence with a captured American drone aircraft, tensions have only escalated between the two nations. After Iran threatened to close down the Strait of Hormuz, a crucial path for the nation?s oil trade, the US dispatched 15,000 marines into the area.

US Troops going to Israel
http://endtimeinfo.com/2012/01/us-troops-going-to-israel/
IranIsraelwar
Previous ArticleWELCOME TO THE PARANORMAL: Market Implosion And The End Of Economic Life As We Know ItNext ArticleBig Brother malls trigger privacy row after installing equipment to spy on shoppers via their mobiles