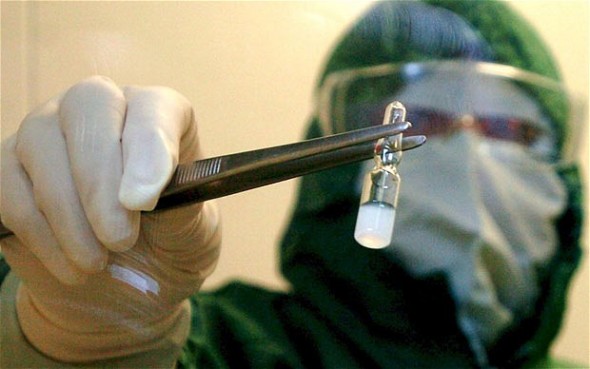 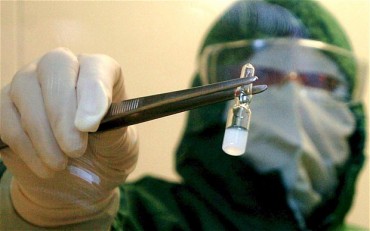 The World Health Organisation has said that research into a dangerous new man-made mutant form of the bird flu virus will be made public in full at some point.

However, the publication will not come until scientists have had time for ‘a much fuller discussion of the risk and benefits of research in this area, and risks of the virus itself,’ according to an official.

The agreement in principle to release the details of the deadly virus breaks days of deadlocks over whether the dangers of it being used as a weapon outweigh the advantages for researchers trying to find a vaccine.

Scientists, health officials and science journal editors have this week been locked in talks on whether the study should be released amid fears it could be exploited by bioterrorists.

The controversial research shows how to make a mutant strain of the H5N1 virus, which kills roughly half of those who contract it, more contagious.
Earlier, the editor of a leading science journal had said that it is his duty to release the information.

Dr Bruce Alberts, editor of Science, did not publish after officials from the U.S. National Science Advisory Board for Biosecurity intervened, in an unprecedented move, warning of the risks if the virus fell into the hands of ‘those who would seek to do harm.’

Dr Alberts said: ‘Our position is we have to publish in complete form.’

‘In the absence of any mechanism to get the information to those scientists who need to protect their populations and to design new treatments and vaccines, our default position is that we have to publish in compete form.’

Scientists believe that publishing the details of the research is essential to developing flu vaccines. Dr Alberts says creating a vaccine is essential in case the strain evolved in the wild.

‘This is likely to happen at some point in the wild because these viruses are mutating very actively in the wild,’ he said.

A World Health Organisation summit in Geneva this week is discussing the problem.

Experts warn that whatever the outcome of the meeting, censorship will not stop scientists getting the tools to create and release a pandemic H5N1 virus if they were intent on doing so.

‘It doesn’t matter how much you restrict scientists from doing good, bad people can still do bad things,’ said Wendy Barclay, an expert in flu virology at Imperial College London.

The WHO called the ‘closed door’ meeting, set to begin Friday in Geneva, to break a deadlock between scientists and U.S. biosecurity chiefs.

American officials want to censor the work of two research teams, one in the Netherlands and one in the U.S., who have found that just a small number of mutations would allow deadly H5N1 to spread between mammals like ordinary flu.

The United Nations health body has said it is ‘deeply concerned about the potential negative consequences’ if the findings were to make their way into the public domain.

On January 20, flu scientists from around the world declared a 60-day moratorium on any research involving H5N1 that could produce more contagious forms of the virus.

At this week’s meeting, the researchers who made the findings and the editors of Science and Nature, the two journals asked to withhold publication, will meet officials from the U.S. National Science Advisory Board for Biosecurity (NSABB) which asked for the papers to be censored.

Keiji Fukuda, the WHO’s Assistant Director-General for Health Security and Environment, who will chair the meeting, says he would like to secure agreement on whether the studies should be published, in full or part, and who should have access to them.

The findings are seen as vital for scientists to be able to develop vaccines, diagnostic tests and anti-viral drugs that could be deployed in the event of an H5N1 pandemic.

‘It is important that research on these viruses should continue,’ Mr Fukuda said. ‘They do pose a risk. There’s a lot of things we don’t know about them.

‘The question is not really should we continue to do research … but under what conditions can we do it so we don’t unnecessarily create fears and risks.’

‘This flu strain has the potential to cause such enormous damage, and it’s important to know how far away we are from a horrible event like that’ John Edmunds, London School of Hygiene and Tropical MedicineFirst detected in Hong Kong in 1997, the H5N1 virus remains entrenched among poultry in many countries, mainly in Asia, but so far remains hard for humans to catch.

It is known to have infected nearly 700 people worldwide since 2003, killing half of them, making it far more deadly than the H1N1 swine flu which caused a pandemic in 2009/2010.

Ron Fouchier, the scientist leading the Dutch team that gave H5N1 various genetic mutations and made it transmissible in mammals, argues the research must be published.

He says it could help public health officials better prepare for a scenario where the virus mutates and becomes more deadly, spreading from person to person via coughs and sneezes.

He has also said other research teams around the world are close to the same findings, some of them inadvertently, and should be warned in advance how the virus could become airborne.

In the short term, most scientists agree the moratorium is ‘a good gesture,’ as flu expert and former WHO health security adviser David Heymann describes it, one that offers the research community space to think.

Still, Mr Heymann, Ms Barclay and many other scientists argue that stopping this type of research into flu viruses and other potentially lethal pathogens would set a dangerous precedent.

Although adding and deleting genes can create super-strains that put the entire world at risk, Heymann said, the work is vital to developing effective vaccines and diagnostic tests which will be needed quickly if a pandemic hits.

Stopping the research would prevent researchers from using all possible scientific options to prepare for naturally occurring, or deliberately caused, outbreaks.

John Edmunds, head of infectious disease epidemiology at the London School of Hygiene and Tropical Medicine, says studies on mutations of H5N1 are ‘important work’ that must go on.

‘This flu strain has the potential to cause such enormous damage, and it’s important to know how far away we are from a horrible event like that,’ he said.

What happened at the WHO meeting?

According to WHO, the meeting produced consensus on: