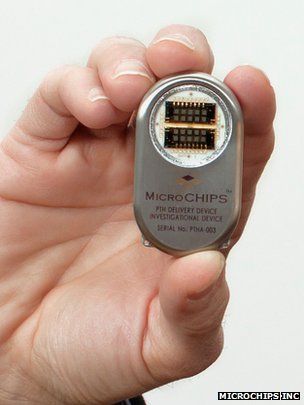 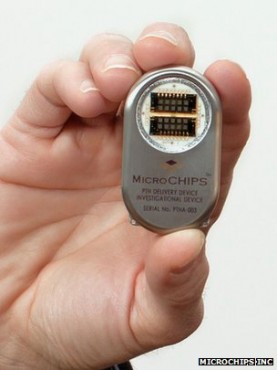 It sounds like something out of a sci-fi movie: A patient visits a doctor’s office and, after a brief surgical procedure, walks away with a microchip under her skin that delivers medication in precisely timed and measured doses.

That scenario doesn’t seem so futuristic anymore. Researchers at the Massachusetts Institute of Technology (MIT) announced today that they have successfully completed the first trial of a drug-releasing microchip in humans.

The results were published on the website of the journal Science Translational Medicine.

The pacemaker-sized microchip devices, which were implanted near the waistline of seven 60-something women in Denmark, worked as intended, releasing up to 19 daily doses of an osteoporosis drug that ordinarily requires injections. The implants proved safe, and tests revealed that they delivered the medication as effectively as once-a-day shots.

The devices won’t be ready for mainstream use for at least another four years. But the researchers say the technology will ultimately enable people who take injectable drugs for conditions such as multiple sclerosis and rheumatoid arthritis to swap their needles for microchips.

Other drugs that could potentially be delivered in this manner include chemotherapy, fertility hormones, and vaccines, they say.

Langer, a chemical engineer, came up with the idea for the drug-delivery device about 15 years ago, while watching a TV show on how microchips are made in the computer industry.

Langer and his colleagues at MIT worked on the idea throughout the 1990s, and published the first paper on their research in 1999. That same year, Langer cofounded a privately held company, MicroCHIPS, Inc., to license the technology from MIT and commercialize the device.

Here’s how it works: Microchips containing tiny reservoirs of concentrated, freeze-dried medication are secured to the surface of a titanium housing, which also contains a wireless transmitter that communicates with a small portable computer. A surgeon implants the device via a one-inch incision, in an outpatient procedure requiring local anesthesia only. 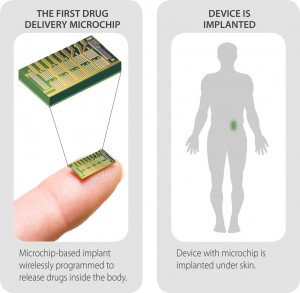 Each reservoir on the microchip holds a single dose of medication and is sealed by a thin metal membrane. When instructed by the computer, the implant sends an electrical current through a membrane and melts it, allowing body fluids to flow into the reservoir and the powdered drug to diffuse into the body. (The melted metal resolidifies on the chip and is not released.)

In the recently completed trial, the microchips were loaded with Forteo (teriparatide), a drug used to build bone mass in postmenopausal women with osteoporosis. The study participants carried the implants for a total of 103 days, and received medication on 20 of those days. Overall, the devices successfully released 94% of the doses as planned.

Drug-releasing microchip passes first test in humans
http://endtimeinfo.com/2012/02/drug-releasing-microchip-passes-first-test-in-humans/
chip implantmark of the Beastmicrochip implantRFID
Previous ArticleWhat If Someone Could See Everything You?ve Ever Googled?Next ArticleGo-ahead for world’s first mobile euthanasia unit that will allow patients to die at home