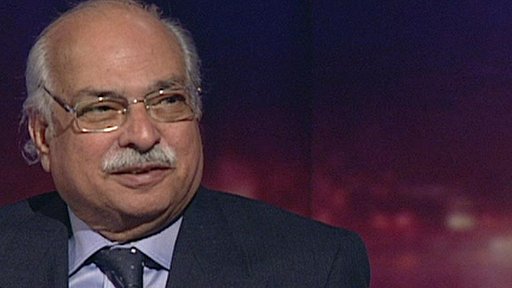 The Pakistani High Commissioner to Britain has reiterated his country?s support for the Islamic Republic of Iran in case of an Israeli regime?s attack.

Wajid Shamsul Hasan told the British The Sun newspaper that ?Pakistan would be left with no option but to support Iran if Israel attacks it?.

?We wouldn?t like to be seen as part of Israel?s campaign against any country. If Israel attacks Iran, it will have an impact on Pakistan as well?, said the Pakistani High Commissioner to Britain.

?We will have to safeguard our own interests. We also have a Shia population in Pakistan who will not take it lying down?, he stressed.

The Pakistani official warned Britain to help stop the U.S. “Drone Wars” that are slaughtering hundreds of its innocent civilians.

Wajid Shamsul Hasan said that his country’s relations with America are at their lowest ebb.

Hasan said Pakistan backs the War on Terror waged by Britain and the US.

But, he urged British Prime Minister David Cameron to condemn US drone attacks on his country dubbing them as “war crimes” and “little more than state executions”.

?We know the damage – destroyed schools, communities, hospitals. They are civilians – children, women, families. Our losses are enormous,? the newspaper quoted him as saying.

?I think time is running out until the Pakistan government can take a stand. They will have to at some stage take punitive actions to stop them. They have got means to take such actions to defend their own frontier and territories,? Hasan further added.

Hasan urged the British Prime Minister to convince the US that the drone attacks were counter-productive, making the American ?the most hated people in the minds of the people in Pakistan.?