While hardly discussed broadly in the mainstream media, the top news of the past 24 hours without doubt is that in addition to losing its fiscal sovereignty, and numerous other things, the Greek population is about to lose its gold in a perfectly legitimate fashion, following amendments to the country’s constitution by unelected banker technocrats, who will make it legal for Greek creditors – read insolvent European banks – to plunder the Greek gold which at last check amounts to 111.6 tonnes according to the WGC.

And so we come full circle to what the ultimate goal of banker intervention in the European periphery is – nothing short of full gold confiscation. So just how much gold will be pillaged by the banker oligarchy (it is amusing how many websites believe said gold is sacrosanct by regional national banks, and thus the EUR is such a stronger currency as it has all this ‘gold backing’ – hint: it doesn’t, as all the gold is about to be transferred to non-extradition countries)?

As the World Gold Council shows in its latest update, between all the PIIGS, who will with 100% certainty suffer the same fate as Greece (which has shown that unlike during World War 2, it is perfectly willing to turn over and do nothing) there is 3234 tonnes of gold to be plundered. And likely more as further constitutional amendments will likely make the confiscation of private gold the next big step.

How much does this amount to? At today’s prices this is just shy of $185 billion. Of course by the time the market grasps what is going on the spot price of the yellow metal will be far, far higher. Or, potentially far, far lower and totally fixed as the open gold market is eventually done away with entirely in a reversion to FDR gold confiscation and price fixing days.

The chart below shows total gold holdings for the top 40 countries. Little Ireland is off the chart with just 6 tonnes of gold. 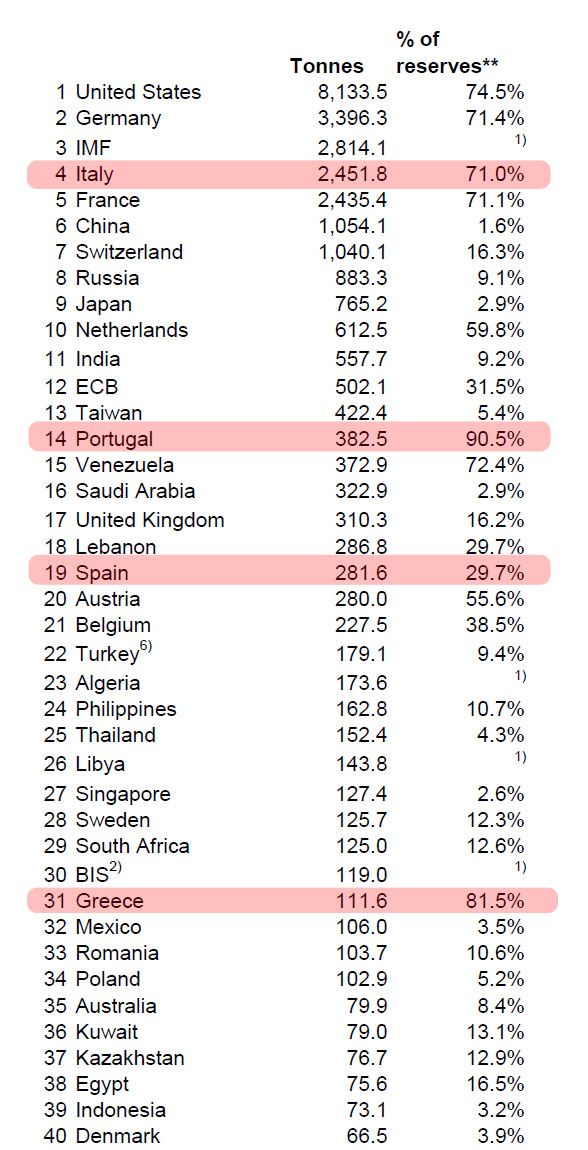