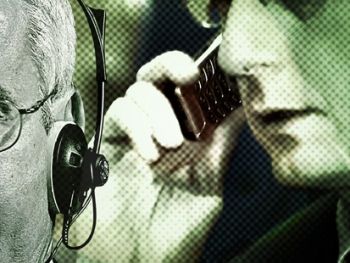 Via The Raw Story

A new feature story in this month?s Wired blows the lid off plans for a massive new National Security Agency data center in Utah that represents the resurrection of a program that Congress killed in 2003, known as ?Total Information Awareness,? targeting literally all electronic communications all over the world ? including those made by American citizens.

The proposal was to build computing systems that could suck up every electronic communication on the planet and filter them through a smart super-computer that would flag certain conversations, emails, transactions and other items of interest for further review. It was a program so monstrous in scope that after a brief legislative battle, Congress imposed strict regulations on the type of technology that could accomplish those ends, prohibiting it from ever being used against Americans.

But if well sourced intelligence reporter James Bamford is to be believed, as of this year, their efforts to stop it are moot.

According to Bamford, the NSA?s new data center in Utah will be the most all-encompassing spy machine ever conceived, capable of breaking almost any encryption, reading any email and recording any phone call anywhere in the world, even if it?s not made over the Internet. A network of ultra-sensitive satellites enhance the center?s intelligence-finding capabilities with the unique ability to sniff electronic communications from a massive distance.

More troubling still, Bamford?s three covert sources who worked for the NSA reportedly claim that the agency is dumping Americans? communications into the mix, knowingly violating the U.S. Constitution in pursuit of a modern-day Manhattan Project.

When Congress struck down the Pentagon?s ?Total Information Awareness? program, they did, however, authorize funding for ?processing, analysis, and collaboration tools for counter terrorism foreign intelligence,? which is precisely how the NSA describes this data center. Just a year after that authorization, Bamford notes that the Department of Energy founded a computing facility where scientists developed technology that was secretly being funneled to the NSA for the data center currently under construction.

Bamford?s sources are not the first to come forward with claims of dubious activity at the NSA. The Obama Administration prosecuted NSA whistleblower Thomas Drake for funneling secret data to a nameless reporter, and former NSA analyst Russell Tice came forward with other revelations in 2005, and again in 2009. Even back then he was warning that the NSA had access to all Americans? communications and even private credit card information. That message was heard, and heard well, by lawmakers like Sen. Jay Rockefeller (D-WV), who said he would not be surprised to learn that the NSA was even spying on him.

In these latest revelations, one of Bamford?s covert sources claims that the NSA is on the verge of a massive coup, putting the U.S. inches away from ?a turnkey totalitarian state.? A much smaller spying program that targeted top Democrats and reporters, uncovered amid an investigation into a burglary, was the impetus for impeachment proceedings against former President Richard M. Nixon, which caused him to resign part-way through his second term. At the time, Congress was concerned that such power would be wielded for political purposes.

?Total Information Awareness? surveillance program returns, bigger than ever
http://endtimeinfo.com/2012/03/%e2%80%98total-information-awareness%e2%80%99-surveillance-program-returns-bigger-than-ever/
Big Brotherdystopiamonitoringpolice statespyingsurveillance
Previous ArticlePolice drones to be equipped with non-lethal weapons?Next ArticleThe CIA wants to spy on you through your TV: Agency director says it will ‘transform’ surveillance