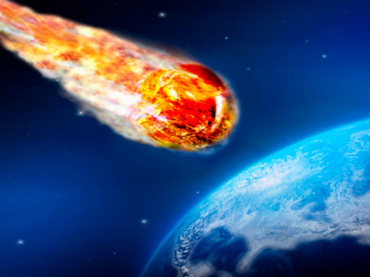 To avert a possible catastrophe ? this time set for February 2013 ? scientists suggest confronting asteroid 2012 DA14 with either paint or big guns. The stickler is that time has long run out to build a spaceship to carry out the operation.

NASA’s data shows the 60-meter asteroid, spotted by Spanish stargazers in February, will whistle by Earth in 11 months. Its trajectory will bring it within a hair?s breadth of our planet, raising fears of a possible collision.

There is a possibility the asteroid will collide with Earth, but further calculation is required to estimate the potential threat and work out how to avert possible disaster, NASA expert Dr. David Dunham told students at Moscow?s University of Electronics and Mathematics (MIEM).

?The Earth?s gravitational field will alter the asteroid?s path significantly. Further scrupulous calculation is required to estimate the threat of collision,? said Dr. Dunham, as transcribed by Russia?s Izvestia. ?The asteroid may break into dozens of small pieces, or several large lumps may split from it and burn up in the atmosphere. The type of the asteroid and its mineral structure can be determined by spectral analysis. This will help predict its behavior in the atmosphere and what should be done to prevent the potential threat,? said Dr. Dunham.

In the event of a collision, scientists have calculated that the energy released would equate to the destructive power of a thermo-nuclear bomb.

In response to the threat, scientists have come up with some ingenious methods to avert a potential disaster.

With the asteroid zooming that low, it will be too late to do anything with it besides trying to predict its final destination and the consequences of impact.

A spaceship is needed, experts agree. It could shoot the rock down or just crash into it, either breaking the asteroid into debris or throwing it off course.

?We could paint it,? says NASA expert David Dunham.

Paint would affect the asteroid?s ability to reflect sunlight, changing its temperature and altering its spin. The asteroid would stalk off its current course, but this could also make the boulder even more dangerous when it comes back in 2056, Aleksandr Devaytkin, the head of the observatory in Russia?s Pulkovo, told Izvestia.

But if the entire asteroid is to crash into the planet, the impact will be as hard as in the Tunguska blast, which in 1908 knocked down trees over a total area of 2,150 sq km (830 sq miles) in Siberia. This is almost the size of Luxembourg. In today?s case, the destination of the asteroid is yet to be determined.

Blast it or paint it: Asteroid to threaten Earth in 2013
http://endtimeinfo.com/2012/03/blast-it-or-paint-it-asteroid-to-threaten-earth-in-2013/
asteroidnatural disasters
Previous ArticleBig Brother just got scarier: Japanese CCTV camera can scan 36 million faces per secondNext Article10 Reasons Why The Reign Of The Dollar As The World Reserve Currency Is About To End