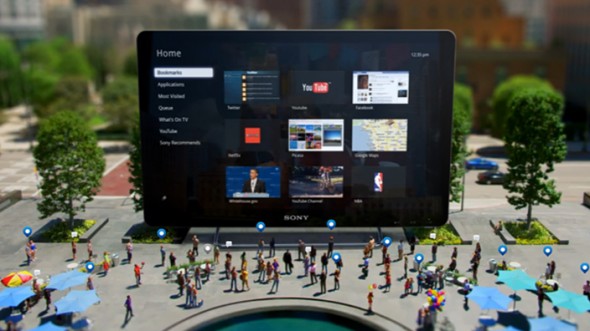 When people download a film from Netflix to a flatscreen, or turn on web radio, they could be alerting unwanted watchers to exactly what they are doing and where they are.

Spies will no longer have to plant bugs in your home – the rise of ‘connected’ gadgets controlled by apps will mean that people ‘bug’ their own homes, says CIA director David Petraeus.

The CIA claims it will be able to ‘read’ these devices via the internet – and perhaps even via radio waves from outside the home.

Everything from remote controls to clock radios can now be controlled via apps – and chip company ARM recently unveiled low-powered, cheaper chips which will be used in everything from fridges and ovens to doorbells.

The resultant chorus of ‘connected’ gadgets will be able to be read like a book – and even remote-controlled, according to CIA CIA Director David Petraeus, according to a recent report by Wired’s ‘Danger Room’ blog.

Petraeus says that web-connected gadgets will ‘transform’ the art of spying – allowing spies to monitor people automatically without planting bugs, breaking and entering or even donning a tuxedo to infiltrate a dinner party.

‘Particularly to their effect on clandestine tradecraft. Items of interest will be located, identified, monitored, and remotely controlled through technologies such as radio-frequency identification, sensor networks, tiny embedded servers, and energy harvesters –  all connected to the next-generation internet using abundant, low-cost, and high-power computing.’

Petraeus was speaking to a venture capital firm about new technologies which aim to add processors and web connections to previously  ‘dumb’ home appliances such as fridges, ovens and lighting systems.

This week, one of the world’s biggest chip companies, ARM, has unveiled a new processor built to work inside ‘connected’ white goods.

The ARM chips are smaller, lower-powered and far cheaper than previous processors – and designed to add the internet to almost every kind of electrical appliance.

It’s a concept described as the ‘internet of things’.
Futurists think that one day ‘connected’ devices will tell the internet where they are and what they are doing at all times – and will be mapped by computers as precisely as Google Maps charts the physical landscape now.

Privacy groups such as the Electronic Frontier Foundation have warned of how information such as geolocation data can be misused – but as more and more devices connect, it’s clear that opportunities for surveillance will multiply.