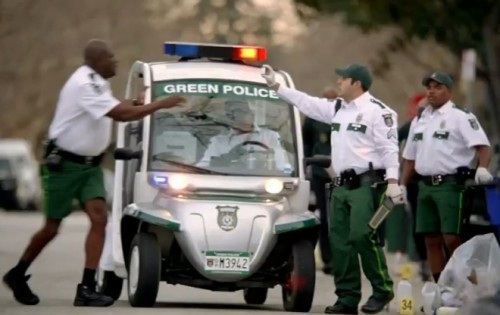 Professor Kari Norgaard?s assertion that skeptics of man-made climate change should be ?treated? for some kind of psychological disease because they refuse to be brainwashed by the global warming mantra gives us an opportunity to take a retrospective look at some choice cuts from past statements made by climate alarmists in which they openly advocate fascism under the banner of saving the planet.

– Forum for the Future, an organization funded by monolithic elitist banks and corporations like Royal Dutch Shell and Bank of America as well as the British government, floated the scenario in the video above as one of the proposals for their ?Megacities on the move? project. The clip shows every facet of human behavior, from meat consumption, to car use, to career choices, regulated by a dictatorial technocracy. People who resist the state controlling every aspect of their existence will be forced to live in squalid ghettos while the rest of the population will be tightly controlled in high-tech prison cities. As we previously documented, every draconian idea in this scenario has been borrowed from historical dictatorships, but it?s all OK because it?s for the earth!

– Finnish environmentalist guru Pentti Linkola, publicly called for climate change deniers be ?re-educated? in eco-gulags and that the vast majority of humans be killed with the rest enslaved and controlled by a green police state, with people forcibly sterilized, cars confiscated and travel restricted to members of the elite.

– Another Finnish environmentalist writer, Martin Kreiggeist, hails Linkola?s call for eco-gulags and oppression as ?a solution,? calling for people to ?take up the axes? in pursuit of killing off the third world. Kreiggeist wants fellow eco-fascists to ?act on? Linkola?s call for mass murder in order to solve overpopulation.

– In 2010, James Lovelock, the creator of the Gaia hypothesis, told the Guardian that ?democracy must be put on hold? to combat global warming and that ?a few people with authority? should be allowed to run the planet because people were too stupid to be allowed to steer their own destinies.

– This sentiment was echoed by author and environmentalist Keith Farnish, who in his book called for acts of sabotage and environmental terrorism in blowing up dams and demolishing cities in order to return the planet to the agrarian age. Prominent NASA global warming alarmist and Al Gore ally Dr. James Hansen endorsed Farnish?s book.

– Another prominent figure in the climate change debate who exemplifies the violent and death-obsessed belief system of the movement is Dr. Eric R. Pianka, an American biologist based at the University of Texas in Austin. During a speech to the Texas Academy of Science in March 2006, Pianka advocated the need to exterminate 90% of the world?s population through the airborne ebola virus. The reaction from scores of top scientists and professors in attendance was not one of shock or revulsion ? they stood and applauded Pianka?s call for mass genocide.

– The current White House science czar John P. Holdren also advocates the most obscenely dictatorial, eco-fascist, and inhumane practices in the name of environmentalism. In his 1977 Ecoscience textbook, Holdren calls for a ?planetary regime? to carry out forced abortions and mandatory sterilization procedures, as well as drugging the water supply, in an effort to cull the human surplus.

– The mindset of this gaggle of arrogant, scoffing elitists in their drive to micro-manage the human race, which they regard as a plague on the earth, is best encapsulated by the following quote from ?Planet Under Pressure? attendee and Yale University professor Karen Seto. ?We certainly don?t want them (humans) strolling about the entire countryside. We want them to save land for nature by living closely [together],? Seto told MSNBC.

– These control freaks even see the very act of breathing itself as a sin against mother earth. A 2007 New York Times editorial seriously floated the idea that humans should be taxed for exhaling carbon dioxide and ?using the atmosphere like a municipal dump?.

– The bloodlust shared by global warming alarmists is also embraced by infamous serial killer mastermind Charles Manson, who during prison interviews routinely spoke of his belief that around 50 million humans should be slaughtered for the good of the planet. Still behind bars, Manson is now a climate change guru and attracts a wave of devoted followers.

– We occasionally see demented devotees of climate alarmists act out violently to express their beliefs. People like James Jay Lee are now turning such rhetoric into violent action, following in the footsteps of others like Francisco Lotero and 23-year-old Miriam Coletti, who killed themselves, their son, and attempted to kill their own baby as part of a suicide pact to bring attention to global warming

– While demanding the general public lower their living standards to comply with the new green agenda, its proponents are complete hypocrites who live in the lap of luxury. Think Al Gore and his multiple oceanside mansions with heated swimming pools. Gore will still be able to roll around in SUV?s and fly private jets while quaffing the finest fillet steak and belching tons of CO2 as he lecture the rest of humanity about their carbon footprint. Think Prince Charles and his insistence that the proles not be allowed to take baths as he lounges in the luxuriant splendor of royal palaces.

This is by no means an exhaustive list, but it gives you an insight into the kind of eco-tyranny we will be living under if these lunatics are allowed to go unchallenged, which if Kari Norgaard has her way is exactly what will happen ? because we?ll have all been lobotomized out of our common sense and re-educated to accept green fascism.

Green Fascism: The Growing Threat of Eco-Tyranny
http://endtimeinfo.com/2012/04/green-fascism-the-growing-threat-of-eco-tyranny/
climate changeclimategategreen fascismmega-cities
Previous Article10 Reasons Why Nothing You Do On The Internet Will EVER Be Private AgainNext ArticleIsrael’s Plan To Attack Iran Put On Hold Until Next Year At The Earliest?