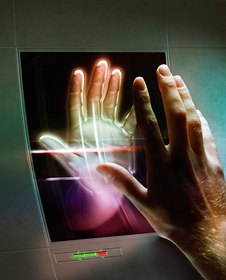 Proponents of new biometric technologies always point out the positive aspects, such as convenience, security, lower costs, and improved quality, speed, and efficiency in the delivery of goods and services. Little is said about the negative aspects of this public intrusion into what were once private personal affairs. Under the banner of science and technology, and more recently ?the war against terrorism,? the governments of the world are rushing to complete the Antichrist?s economic and political system for him ? the very system the Bible warns against.

The following article appeared on News-Press.com:

Lee County students might one day pay for their school lunches by flashing their palms.

The district?s food department told the school board Tuesday that it wants to test a voluntary palm reader scanning system in several school cafeterias. Sonny Stelmacki, the district?s assistant food director, said the system would cut cafeteria wait times in half and better identify students who often forget their eight-digit lunch codes or lose their lunch IDs.

If approved by the school board at a future meeting, the hardware for the palm reader system would cost $192,000. But some parents and at least one school board member fear the system could invade the privacy of students and compromise their personal information.

?The system does not take a photograph or copy the actual palm of the student so identity theft is eliminated,? Stelmacki said. ?The system uses the unique vein patterns that are located under the skin in the palm of your hand. As students? palms are waved over a near-infrared light their individual vein pattern is converted into an encrypted numerical code number.?

At an earlier meeting, school board member Jeanne Dozier said she was fearful of scanning students? palms. She wondered what would happen if their personal information was released.

?I don?t know how y?all feel about it but that put a twist in my stomach. It?s invading the privacy of students,? Dozier said. ?Efficiency is one thing but that is something that almost gave me heartburn. As a grandparent that concerns me a little bit.?

School Board Chairwoman Mary Fischer pointed out that ?kids won?t lose their palms but they will lose their ID cards.?

Stelmacki said parents can opt out of the program and have their children continue typing in codes on cafeteria keypads. But Stelmacki said palm readers would help the district meet its national school lunch goals for correctly identifying the recipients of every paid, free or reduced meal. The system would also give students more time to eat in their already compacted class schedule.

?The primary drivers for us are the students, security and adhering to our budgets,? Dunham said. ?Palm Secure Technology and MCS Software addressed our priorities.?

Lee County parent Amy Turner, whose son is in the eighth grade, would have no problem if the school board approved the new system.

?Do I think it?s invasive? No,? Turner said. ?When you get federally funded money to pay for food, I think you should be grateful. I?m sure the school district would make sure it?s safe.?

?If Disney can do it, then schools can do it on a smaller scale,? Turner said.