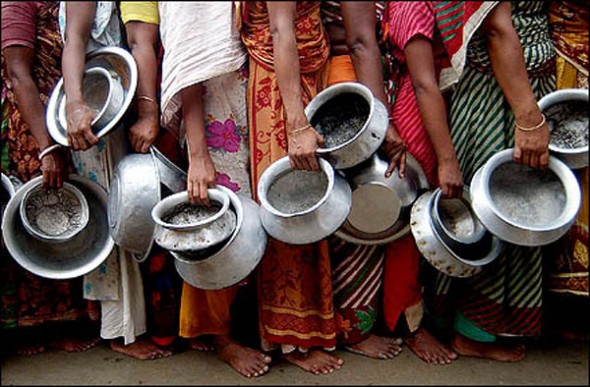 ?What for a poor man is a crust, for a rich man is a securitized asset class.? – Futures trader Ann Berg, quoted in The Guardian UK 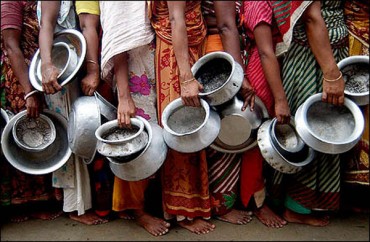 Global food prices rose in March for a third straight month with more hikes to come, the UN?s food agency said on Thursday, adding to fears of hunger and a new wave of social unrest in poor countries.

Record high prices for staple foods last year were one of the main factors that contributed to the Arab Spring uprisings in the Middle East and North Africa, as well as bread riots in other parts of the world.

The cost of food has risen again this year after coming down from a February 2011 record peak.

The FAO index, which measures monthly price changes for a basket of cereals, oilseeds, dairy, meat and sugar, averaged 215.9 points in March, up from a revised 215.4 points in February, the United Nations? Food and Agriculture Organisation (FAO) said.

Although below the February 2011 peak of 237.9, the index is still higher than during a food price crisis in 2007-08 that raised global alarm.

?The food crisis has not gone away since then,? said Emilia Casella, spokeswoman for the UN?s World Food Programme. ?Prices are a big concern and have remained a large reason why people are food insecure.?

The FAO?s senior economist and grain analyst Abdolreza Abbassian told Reuters there was scope for more price rises in the first half of this year, particularly for corn and soybeans, which could also drive up the price of wheat.

The net cereal import bill of the low-income food-deficit countries, known as LIFDCs, is expected to rise to a record US$32.62-billion in 2011/12 from $32.28 billion in 2010/11 because of higher prices and lower domestic production, the FAO said in March. Poor countries face unrest if they cannot find the cash.

?Rising food prices are placing fresh pressure on policymakers globally at a time when many governments just have less money,? said Larbi Sadiki, an expert in North African politics at Britain?s Exeter University.

?In north Africa, food subsidies are a red line, especially in Tunisia and Egypt,? he said. ?Citizens can be expected to take to the streets to demand social justice.?

U.S. soybean futures rose about 7% in March and gained about 17% in the first quarter of this year spurred by concerns about tight supplies as drought hit South America and smaller U.S. plantings.

High oil prices have fanned inflationary concerns since the start of this year. Consumer prices in the 17 nations sharing the euro were up 2.6 percent in March from a year ago, despite the region?s stumbling economy.

.?The food price index has an extremely high correlation to oil prices and with oil prices up it?s going to be difficult for food prices not to follow suit,? said Nick Higgins, commodity analyst at Rabobank International.

?We really saw the (food index) declines in Q4 2011 as being anomalous and related more to sell offs from the threats posed by the European macroeconomic situation rather than agricultural fundamentals,? he said.

The FAO cut its estimate for world cereal production in 2011 slightly to a still record 2.343 billion tonnes, down from an earlier estimate 2.344 billion tonnes. It confirmed an earlier forecast for world wheat output to fall 1.4% from last year?s record crop to 690 million tonnes in 2012.

Abbassian said corn stocks were far from comfortable levels at present and a considerable boost in output was needed to replenish them.

Coarse grains stocks, which include corn, could decline by nearly 3 million tonnes to 171.3 million tonnes at the end of the 2011/2012 season, the lowest level since 2008, the FAO said.

A U.S. government report last week with lower than expected estimates of grain stocks and reduced soybean and wheat plantings added to concerns about global grain supplies, driving a rally in grain futures.

Stocks of grain in the European Union are set to hit a four-year low by the end of the 2011/12 marketing campaign, with a diminishing crop outlook threatening further drawdowns next season, traders and analysts say.

Strong price swings are expected due to weather changes in major producing countries and more price volatility could come if U.S. farmers decide to plant more soybeans after being lured by high prices, the FAO?s Abbassian said.

?If I were a farmer and I would look at the steep increases that we?ve got since the planting intentions report, I would be a bit more cautious about putting everything into corn and would be considering soybeans also as a good option,? he said.

World food prices could fall in the second half of this year with new crops easing market tension and driving full-year average prices below the record levels of 2011, he said.

The FAO raised its forecast for keenly-watched world cereal carryover stocks ? the amount left over at the end of the current marketing season ? by 1 million tonnes from the previous estimate to 519 million tonnes, 15.6 million tonnes above the season?s opening levels, mostly thanks to increased rice stocks.

But the sustained high prices so far this year are keeping the issue at the top of the agenda for policymakers.

?We will be 7.2 billion people on earth in 2015, and more than one million have died from starvation in 2011. The situation will not improve, and in fact the contrary will happen,? Pierre Reuland, Interpol?s special representative to the European Union, told a meeting of European security officials in January. ?For poor people the struggle for life will not be better than it is today.?