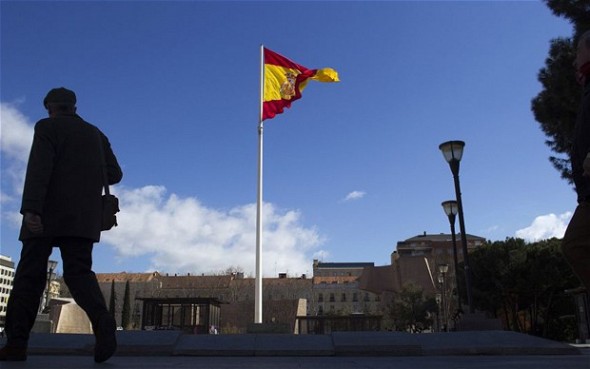 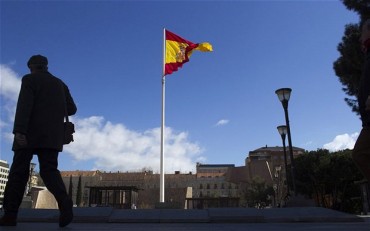 S&P cuts Spain’s credit rating by two notches to BBB+ … Standard & Poor’s cut Spain’s sovereign debt rating Thursday by two notches, warning that the government’s budget situation is worsening and that is likely to have to prop up its banks. S&P cut the country’s rating to BBB-plus and added a negative outlook, saying it expected the Spanish economy to shrink both this year and next, raising more challenges for the government. Esther Barranco, a spokeswoman for the Economy Ministry, told Reuters: “They haven’t taken into consideration the reforms put forward by the Spanish government, which will have a strong impact on Spain’s economic situation.” S&P also said that eurozone-wide polices were failing to boost confidence and stabilize capital flows, and that the region needed to find ways to directly support banks so that governments were not forced to take on those burdens themselves.” ? UK Telegraph

Free-Market Analysis: Is Spain beginning to collapse and, perhaps, the EU with it?

For well over a thousand years, Spain has been at the epicenter of Europe and its fate has provided a bellwether for Europe’s larger situation. And whither Europe goes, so goes the West.

The S&P downgrade on its face is just further confirmation of what is taking place in Spain. Of itself, it has little impact on the larger picture except to make borrowing a bit harder.

But Spain’s problems go well beyond bank borrowing, which is probably an increasingly unlikely scenario in size anyway. The problems in Spain are both deep and pernicious ? as are the difficulties the rest of the PIGS in Southern Europe are subject to.

There are three factors involved in Spain’s meltdown. First, there is the “austerity” being imposed by the right-wing Popular Party (PP) government led by Mariano Rajoy. Only 100 days into Rajoy’s reign, this yielded a general strike on March 29. The government claimed “only” 800,000 workers took part in over 100 demonstrations nationally but according to the unions, millions marched. There was violence as well.

Second, young people are leaving Spain. With almost 50 percent unemployment among youngsters, the situation is easier for those who are NOT situated. They leave. They go to many places but especially to South America, including Argentina and Chile. It helps that with the exception of Brazil, Latin America is a Spanish-speaking continent.

Third is the increasing unhappiness of autonomous regions and cultures. Because of Spain’s incredible history at the epicenter of major European movements, there are all sorts of ethnic subcultures inhabiting Spain. Spain is a kind of tribal patchwork and as the “sovereign crisis” rolls on, this patchwork is becoming unglued.

Catalonia, the Basque Country, Galicia and Andalusia are all self-governing and the Basques especially ? but all the regional peoples ? are growing increasingly restless. Madrid sucks in revenue like a black hole but not enough of it reappears.

And then there is the king. The Spanish are angry at King Juan Carlos these days, as he snuck off to Africa several weeks ago for an elephant hunt. Why the King wishes to shoot elephants is unclear but his timing was certainly bad.

The Guardian newspaper recently noted the following: “As unemployment reached 24%, austerity measures bit and the economy headed back towards double-dip recession, the 74-year-old monarch had publicly claimed he lay in bed at night worrying about the plight of the young jobless. But a fall as he walked to the bathroom in an exclusive safari camp in Botswana, where he had gone to shoot elephants, water buffaloes and other exotic animals, has revealed a different story.”

The King’s shooting holiday was estimated to cost ?10,000 (?8,000) a day, and both Syrians and Saudis were fingered in picking up the tab. No matter who did or didn’t provide the funding, the King could not have picked a worse week in which to bust a hip.

The Guardian points out the hunt was so infuriating that the normally complaisant Spanish press has now begun to “scrutinize” the royal family.

The times are unusual in Spain, between the tremendous (understated) unemployment, increased austerity measures and expanding restlessness of autonomous regions with their clear-cut cultures. It’s not clear that Spain will go the way of Greece … spinning into chaos. But the signs are not promising.

And Spain is not Greece. Spain, along with France and Germany, is the beating heart of Europe, once (not long ago) the world’s pre-eminent superpower. A Spanish bust-up would be no small thing. It would spell the end of something and the beginning of something else.

Conclusion: And that beginning might not include the EU ? or at least the euro.